POLL: Two And A Half Men 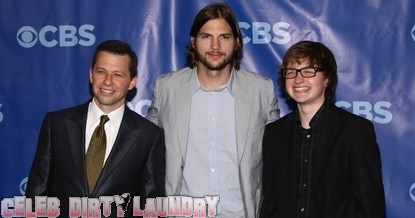 Last night, we saw Ashton Kutcher’s debut on the ninth season premiere episode of Two And A Half Men. (Read our official recap HERE.) Like most of you, we were curious about how the show’s creator, Chuck Lorre, was planning on working Ashton into the storyline.

After watching the show last night, I was flabbergasted by all of the digs that were made at Charlie Harper’s expense. Sure, he deserved some of the jabs for going off on the show during his meltdown earlier this year, but good grief, they lambasted him completely.

In our minds, the hitch for us was the fact that they were at Charlie’s funeral, but no one seemed to be mourning him. No one. Not even the guy’s mother. She was busy stopping his ex-girlfriends from talking about the diseases that he gifted them with, but afterward took the time to plug his Malibu beach house. Because that’s what mothers do while grieving, right? Sad, sad, sad!

Was it too much? Was Walden Schmidt’s sudden appearance outside of Charlie’s house just plain weird? Why was Alan sucking up to him and giving no care to the fact that he just used a dust buster on his brother’s remains?

What I found funny was all of the references to Walden’s penis. The penis jokes were rampant last night, so we would be remiss if we didn’t point out the fact that Chuck Lorre said that he wouldn’t do those, when he launched the show. From his vanity card, #109:

Yet, he referenced the man-child, Walden’s penis, like three times, during the course of the show. Ha.

What did you think of the show? Were you impressed? Were you wondering WHY OH WHY did they fire Charlie Sheen? Did you even tune in to see Ashton make his debut? Or were you busy watching the Roast of Charlie on Comedy Central?

Let us know your thoughts on the show’s season premiere episode! Will you be tuning in next week?