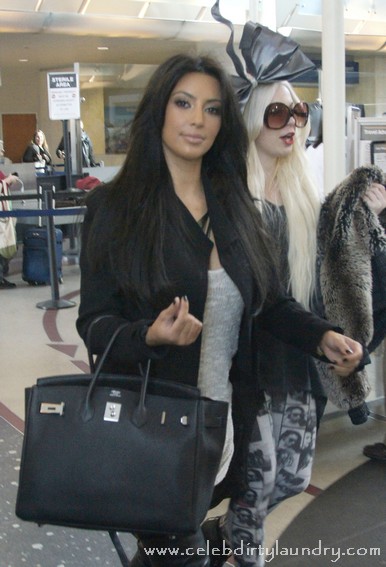 Kim Kardashian just can’t seem to fly under the radar!  She went with her date, New Jersey Nets basketball player Kris Humphries, to see Prince in concert on Monday night and sure enough wound up on stage with the main act!

The pair have been dating since December and look happy together.  In a recent interview with the New York Post Kris confirmed that he has been ring shopping for just the right ring to put on Kim’s finger but would not reveal when he is planning on popping the question.

Kim only recently revealed that she and Kris are officially a couple during an interview with Piers Morgan on the cable network CNN on January 27th she, like Kris, does not seem to be interested in taking things slow.  She recently posted a childhood photo of Kris on her Twitter writing underneath, ‘I want my son to look like this.’  Does this mean that Kim will stop appearing in sex videos?

Prince who is known for such hits as 1999, Kiss, U Got The Look and Sign Of The Times pulled an apparently surprised Kim up on stage during a moment in the show where he invites audience members up to dance with him.

Kim was so overcome by nerves that she refused to dance and was then told to ‘get off the stage’ by the singer.  She excused herself on her Twitter page saying, ‘I was so nervous I froze when Prince touched me!!!!’  That would be the first time Kim froze when touched by a man.

Prince reconsidered and invited her back on stage and this time she made up for her ‘deer in the headlights’ debut.  Kim tweeted afterwards ‘Went up on stage AGAIN!  ‘This time I redeemed myself. We all played the piano while Prince danced. Wow! What a night!’