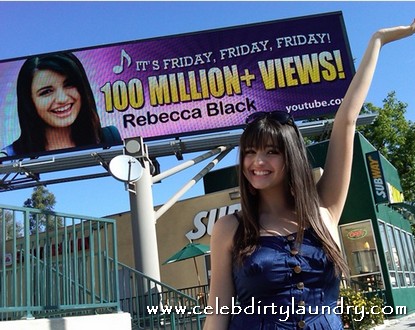 Rebecca Black, the 14 year-old responsible for ‘Friday’ is back in the studio and working on a new EP.  Sources close to Black say she’s started working on a few new tracks with a producer named Charlton Pettus.  Charlton is best known for working with Tears for Fears well after their prime.  His collaboration produced a song for the “Fever Pitch” soundtrack.

No word yet on what day of the week the EP will be released but let’s guess that it will be a Friday.

Meanwhile on Friday, April 15, when most Americans were scrambling to get their tax returns posted, Rebecca scored an achievement unparalleled even by her idol, Justin Bieber.   Yes, Rebecca Black has her own billboard.  The giant advertisement was erected to commemorate the day Black’s repetitive song, Friday, garnered 100+ million You Tube views; thereby surpassing not only Justin Bieber’s Pray, but also Lady Gaga’s Born This Way.  Her friend, Ryan Seacrest, posted a picture on his Facebook page showing the viral video superstar posing in front of her latest triumph.   Not one to allow her career to die on the vine, Rebecca’s traveling road show tour will begin in just a few months in Australia.