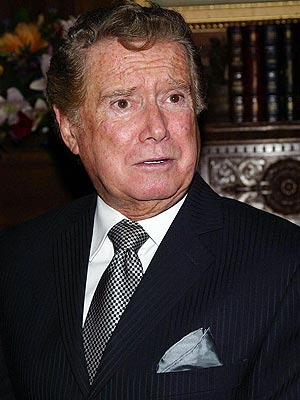 Regis Philbin quit his show because production executives told his agent, Jim Griffin, that they would be cutting his current 18-20 million dollar salary when his contract expired.  The executives were whining about Regis taking so much time off the show and the show not doing as well as expected.  Well Regis showed them his perspective when he announced – totally without warning – on air that he was retiring from the show.

Regis told Kelly Ripa about his decision 15 minutes before they went on the air.  Initially we were heard that she was stunned but not angry but now its come out through sources close to the show that she was absolutely furious.  A source says, “She felt it showed a total lack of respect for her.”

Apparently the entire production team is angry at Regis because they feel he hurt the show by blindsiding everyone.

As for Regis’ agent, Jim Griffin, he has been fired.  Regis feels Griffin did not negotiate the upcoming deal effectively.

That’s life in the big city and on the mean streets of professional entertainment – what have you done for me lately?