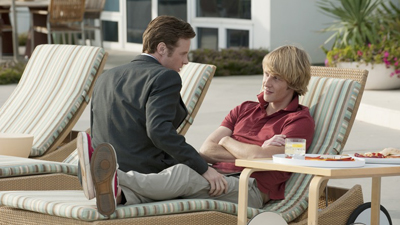 “Loyalty,” the tenth episode of Revenge, opens with Emily (Emily VanCamp) practicing ocean-side karate with her Kill Bill-esque Japanese mentor Mr. Takeda (Hiroyke Sanada), who, throughout the episode, peppers her with fortune cookie-like advice. (“The task in front of you requires absolute focus,” he tells her.) He also questions the role her emotions for Daniel (Joshua Bowman) are playing in her scheme to enact revenge on his parents. And although this episode is short on take-downs, Emily, nonetheless, has her hands full, trying to contain all of the loose strings that threaten to unravel her secret.

Up until now, Nolan (Gabriel Mann) has been Emily’s closest confidante and co-conspirator but, by the end of the episode, destroys their friendship by trying to protect Tyler (Ashton Holmes), the ambitious but deceptive poolhouse boy-turned-investment banker. “You sabotaged our alliance because you fell for a hooker,” Emily accuses him. Still, Nolan’s efforts are thwarted when Emily makes a copy of the video footage of Tyler and Nolan’s steamy hookup and lets Daniel know that Tyler was able to obtain Nolan’s multi-million dollar investment by not-so-ethical means.

Meanwhile, Conrad (Henry Czerny) has filed for divorce from wife Victoria (Madeleine Stowe), a move that literally divides the Grayson household. After Declan (Connor Paolo) takes his brother’s advice to focus on finishing school and “becoming the man that a girl like Charlotte Grayson deserves,” Charlotte (Christa B. Allen) decides to move in with her father, while Daniel sides with his mother after his father, (whom Tyler was able to successfully blackmail with his knowledge of the Graysons’ involvement in the terrorist attack,) doesn’t fire Tyler from the investment firm for the sex scandal with Nolan.

Tyler, enraged by having his liaison with Nolan exposed, storms over to Nolan’s house and dramatically throws the computer genius’ laptop into the pool but not before stealing his USB drive, which, conveniently, means that Tyler is now armed with even more information that he can blackmail everyone with. Later, Tyler meets up for dinner with Ashley (Ashley Madekwe,) who has begrudgingly forgiven him for the gay, makeout session she happened to walked in on during the last episode.

Emily, aka the real Amanda, seems to have given up trying to force the fake Amanda (Margarita Levieva) to leave town, and instead gives fake Amanda her childhood diary, so that she can continue her romance with Jack (Nick Wechsler.) And even though Jack looked like he was beginning to question why the fake Amanda couldn’t recall any of their shared childhood memories (and why Sammy the dog seems so drawn to Emily), he accepts Amanda as being his childhood friend — for now, at least. Meanwhile, Victoria, who has hired a divorce lawyer who may or may not be connected to Emily’s past, overhears a phone conversation between Emily and Daniel about Amanda and is now aware that the daughter of her former lover, who she helped send to prison, is back in town. If the look on Victoria’s face is any indication, she is none-too-pleased.

The preview for the next episode shows Tyler pointing a gun to the heads of Emily and the entire Grayson clan, so something tells us that he may not be sticking around for too much longer. Could he possibly be the one who kills Daniel at the engagement party? Now that Frank, the security guard, is gone, Tyler certainly seems to have become the show’s super-villain.