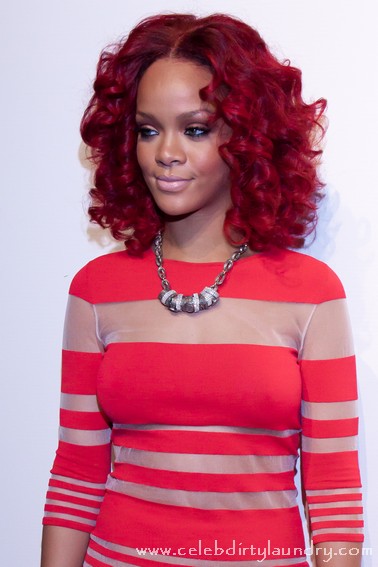 Rihanna is battling a combination of laryngitis and bronchitis and this is jeopardizing her ability to perform with Eminem at the Grammy’s on Sunday night.

One day after pulling out of a benefit concert for Women’s Cancer Research Fund claiming the flu she was spotted at rehearsals for the 53rd annual awards and could still be on for the big show.  Business is business and the Grammy’s are far more important to Rihanna than a charity event.
“Rihanna will perform with Eminem, as scheduled,” a friend of the singer said.

She Tweeted on Friday that she would be rehearsing, despite suffering from bronchitis.  “Rihanna is on steroids and antibiotics to get her as prime time ready as possible for Sunday night,” the source said.

“Rihanna doesn’t want to let Eminem down, but he would totally understand if she couldn’t perform. The duo are scheduled to rehearse again on Saturday at Staples, but she probably won’t be using her voice a lot at that time, she is saving it for Sunday night.”

Again, business is business, and if medical science can prepare Rihanna for the Grammy’s she won’t miss them.