Robert Griffen III Under Lockdown By His Dad 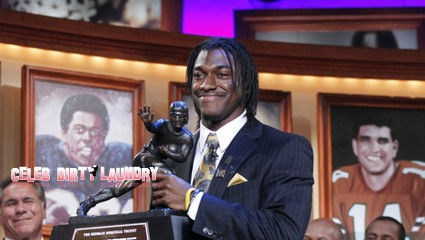 Robert Griffin III is under major guard from his father, Robert Griffin II (aka RG2), who is making sure that no unapproved pesty sports agents get in his face. Dad is demanding any potential sports agents back off his Heisman Trophy winning son while they decide if he is jumping to the NFL.

Apparently Robert is still unsure about that big decision – he is still stressing over it and is not at all certain he wants to go pro right away – largely because he doesn’t want to “let people down” at Baylor.

TMZ has learned from sources close to RG3’s family that RG2 has decided any agents who contact his son directly will be out of the running to sign him … and thereby, screwed out of a future multi-million dollar commission.  Dad wants all the agents to contact him – leaving RG3 alone to focus on next week’s Alamo Bowl, and his Master’s degree. Believe it or not, some reps are playing ball – we’re told Dad’s talking to 5 big-time agents … just in case RG3 goes pro.

Griffin was born in Japan, where his parents, Robert Jr. and Jacqueline, both U.S. Army Sergeants, were stationed. The starting quarterback for the Baylor Bears college football team earned Big 12 Conference Offensive Freshman of the Year honors as a true freshman. As a redshirt junior, RG3 won the Heisman Trophy on December 10, 2011, becoming the first player from Baylor to do so.