Robert Pattinson Begs Kristen Stewart Not To Leave Him! (Photo) 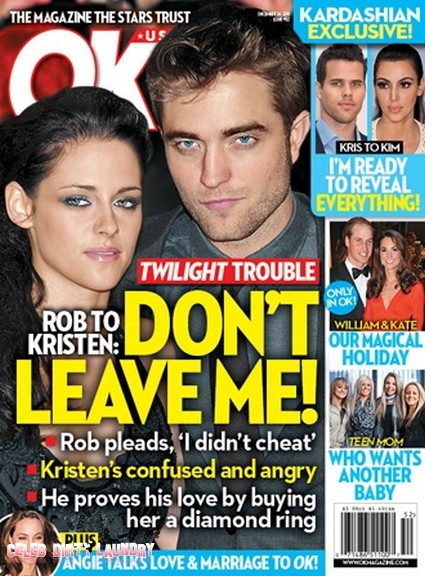 The current issue of OK! Magazine features the cover story “Twilight Trouble – Rob To Kristen, Don’t Leave Me.” On a on Saturday night in December Robert Pattinson and Sarah Roemer had a now infamous ride together in the back seat of an automobile while Kristen was away in England filming Snow White and the Huntsman.  The magazine is reporting that as a result of this there is trouble in Twilight.  They claims Rob told Kristen he did not cheat and Kristen is confused and angry.

OK! has more: “Rob’s one of the world’s biggest heartthrobs and Kristen’s never been able to relax the whole time she’s been with him,” an insider tells OK!. “This was, like, her worst fear realized.”  Rob, 25, denies any infidelity, claiming it was an innocent night out with platonic pals. But now the brooding screen vampire is terrified that Kristen, 21, might come home and toss his guitar and hoodies into the street — and he’s desperately trying to save their relationship.

They go on to claim that Robert is so desperate to save their relationship he bought Kristen a diamond ring to prove his love.  What do you think is Robert cheater mcheater?  What we know for certain is that after partying, and presumably drinking at La Poubelle, Robert and Sarah took off together in the back seat of a car. What do you think?  Sound out in the comments below!

Also included in this week’s issue Ashton Kutcher  flirts up a storm with Lea Michele who is his co-star in his new movie New Years Eve and Kris Humphries threatens to reveal all of Kim Kardashian’s dirty secrets.  For all this and more, pick up the current issue of OK! Magazine.