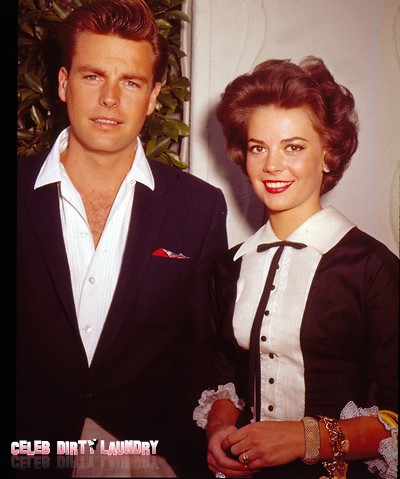 Dennis Davern, the captain of the Splendour the night Natalie Wood died has made a statement that says that he distinctly heard Robert Wagner tell his late wife, Natalie Wood, ‘Get Off My F**king Boat,’ while the two were engaged in a heated argument. It seems that Robert and the his other guest on the yacht, Christopher Walken had a jealous fight over Natalie after which Walken stalked off to bed. Then Robert turned his drunken wrath on Natalie.   Read the key excerpts from Davern’s statement about the incident below as covered by ONTD:

Shortly after a conversation began between Natalie Wood and Christopher Walken, Robert Wagner grabbed the open wine bottle and with rage crashed it upon the coffee table and
screamed out to Christopher Walken, ‘Do you want to f*ck my wife, is that what you want?’ After the bottle smashing, Christopher Walken retreated to his cabin forward and closed the cabin door. He remained there until morning. Natalie Wood was mortified and went
immediately to the master stateroom which is a full length room at the rear of yacht with doors that lead to the rear deck. Robert Wagner followed her within minutes, and then a terrible argument proceeded. I knocked on their stateroom door from the main salon to try to calm the situation. Robert Wagner answered to tell me to go away and to not interfere.

The loud arguing continued and I heard things (objects, possibly people) hitting the walls and things being thrown at the ceiling of the master stateroom. Next, Robert Wagner and Natalie Wood were on the open back deck arguing loudly. It was 11:00 PM. The arguing sounded fast and furious. I looked out and saw Natalie Wood dressed in her nightgown. She was not yet wearing the red down jacket she would be found in the ocean wearing. The arguing continuing. I heard stateroom doors open again. I did not look out. I thought maybe the arguing went back inside, but then I heard voices again on the deck. The only full sentence I could completely decipher during the entire argument was ‘Get off my f*cking boat’ said by Robert Wagner. I could hear both Robert Wagner’s and Natalie Wood’s voices coming from the rear deck the entire time music played. I was terribly concerned but waited about 15 minutes before going to the deck. When I arrived on the rear open deck, only Robert Wagner was present, and he stood near the far rear wall of the yacht.

Robert Wagner appeared sweaty, flushed, anxious, nervous, and disheveled. He told me ‘Natalie is missing’ and asked me to search the yacht. He discussed with me the repercussions of bringing any immediate attention to the situation and he claimed he did not want to tarnish his image. After an hour passed, Robert Wagner began crying and repeated, ‘She’s gone, she’s gone, she’s gone’ which I believed a strange thing to say.

When I arrived at the Wagner home Sunday afternoon, I was immediately led by Robert Wagner’s attorney to the Wagner bedroom. I was told to say nothing regarding Natalie Wood’s death and that I was to see an attorney in the next day or two to sign a statement being prepared for me, which I did sign after barely reading it. Detective Duane Rasure accepted the statement that had been prepared for me, a statement claiming that I did not know details about Natalie Wood’s disappearance from the yacht. Although I did want to reveal what I knew, I obeyed what had been asked of me.

Whatever responsibility and blame is eventually apportioned in the current homicide investigation into Natalie’s death one thing we can say for sure. Alcohol was the true murderer here. All 4 people aboard the Splendour the night of Natalie’s death were drunk – and their drunken behavior and poor decisions led to the tragic death of Natalie Wood.