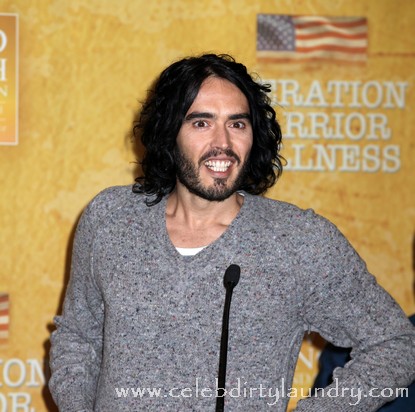 Russell Brand seems to think that he has made up for the years of hell he put his mom through when he was a junkie by taking her to the Oscars.  The big star took his mother to the Oscar celebrations this year and that apparently meant the world to her.

Russell’s past has been plagued by his drug abuse and naturally his single mother paid a big price as well.  Russel said: “One of the main memories I have from when I was on drugs is feeling really low with my mum.  There were all those horrible things for her, like getting calls from police stations.”

“I remember when I was in rehab on Christmas Day in 2002, with my mum visiting and sat on my bed – you could see that she was scared and disappointed. Jimmy Carr was on TV and I’d been in a show with him not long before at the Hackney Empire’s New Act Of The Year.   I had been in the same heat to get to the final but there he was on TV doing a tribute to Peter Cook – and I’m sat in rehab with my mum.   I was a broken person and I had broken my family.  I felt lonely.  So being able to take her to the Oscars – a bit of payback for the stuff she went through when I was a kid – was good.”

Despite the glitz and glamour of the Oscars, Russell admitted he had a better time on a rainy day at Timbuk2 adventure park in Upminster, Essex, with pop star wife Katy Perry and some of his pal’s kids.

“By the time you’ve been through a night of that glamorous stuff, you realise it’s not all that. “We had a better time at Timbuk2 with my pal Danny’s nephews.  We went with all the kids, my mum and Katy.”

To say things have changed for Russell would be the understatement of the century.   The life of an A-list star is something he is now well accustomed to thanks to the big-money production of his latest movie, a remake of hit Eighties comedy Arthur, with Russell filling the shoes of the late, great comic Dudley Moore, who died in 2002.  The new script was written by Peter Baynham, a British comedian who created classic material for Alan Partridge, Borat and Brass Eye.   Russell leads a great cast including Helen Mirren and Nick Nolte.

He said: “I’ve got a really good relationship with Helen.  In interviews she’ll come out with stuff… she’s outspoken.  When I’m doing Press with her, I’m like, ‘Woah! Careful mate, you can’t just say that.”

There are obvious similarities between Russell and Dudley. Both funnymen hail from the same part of the world and have had their share of trouble with booze and women.

Russell said: “He was from Essex so I’m so proud of it.  Also, I feel like the new film is not in any way disrespectful to the original and I feel like I properly loved Dudley Moore.  I watched Not Only… But Also, Beyond The Fringe – I’m a student and a fan.”

Like the pre-rehab Russ, his character Arthur likes a drink, and the now-teetotal comic enjoyed playing the drunken scenes.
Russ said: “Arthur is a very different drunk than I was.  He’s like a fun-loving drunk, I was like a miserable, moany smackhead.   “The way we approached it, well if you didn’t have to go to work, why not spend the whole day drunk?   “On set I’d carry a bottle of Courvoisier, or tequila, I’d smell different boozes depending on how drunk I wanted to be in the film then remember mad nights slumped outside pubs in north London and waking up on a sofa drenched in wee wee.”

Arthur is a big role for Russell and a major step from his days of stand-up comedy and MTV to major global stardom.  As long as he stays straight and sober there is no reason he shouldn’t enjoy a long and prosperous career.