Ryan Phillippe Allows His Last Name To Be Used In Naming Of Ex’s Child? 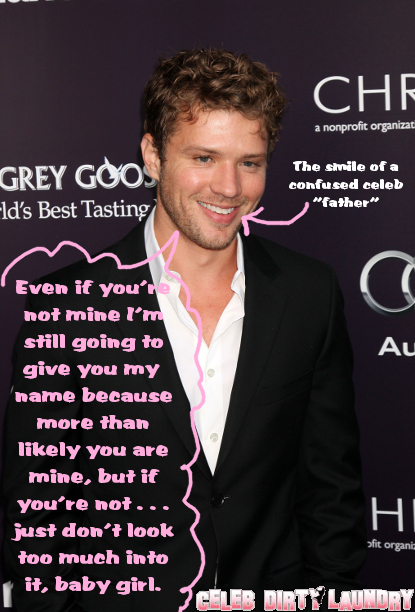 So, y’all remember that baby that supposedly “isn’t” Ryan Phillippe’s? Well, in a shocking twist of fate (please remember most parties involved say the baby isn’t his), Alexis Knapp has decided to give her new daughter a hyphenated last name . . . Kailana Phillippe-Knapp. *major sigh*

Number one, I don’t care if it is your baby, Ryan. Number two, I don’t care if you, Alexis, gave your baby the last name of your baby-daddy-who-y’all-are-saying-isn’t-the-baby-daddy. I just think you all sort of took a backstep with this one–because as far as I’m concerned, even if he really isn’t, you’ve just made Ryan the father by using his last name! Why ya’ gotta treat us like we’re stupid, Celeb World? We’re not.

We all know you’re the father,  Ryan . . . so please, just come clean. We’ll give you a gold star (not a trophy, you wouldn’t deserve a trophy) if you do. Who wouldn’t want a gold star from Celeb Dirty Laundry?

How many of you out there think it’s a smart move to allow your ex’s baby (who you’ve basically denied ownership of by choosing not to elaborate on the issue) to take your last name?