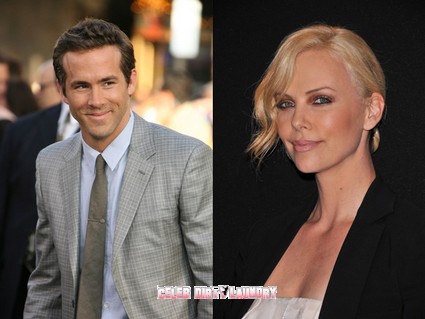 Hollywood has been waiting to see which lucky actress would wind up with newly single Ryan Reynolds.  In the new issue of US Weekly we learn the surprise answer. The mag quotes a source saying that the ‘Green Lantern’ star and Charlize Theron “have been dating for months!  They’re exclusive, and it’s very hush-hush.”

While the two haven’t been photographed together, a witness noticed Reynolds’ motorcycle at Theron’s home all morning on June 5, then saw the actor exit her house around 3 p.m. and she left just minutes later.  Reynolds, who split from wife Scarlett Johansson last December, may have found a perfect match.  “They’re both career-focused,” explains the source, “but not in a crazy way”.

For instance, don’t expect to see the stars side-by-side on a red carpet. “She won’t go to an event with him,” the insider says of Theron, who split with love of nine years Stuart Townsend in 2010. “That’s not her style.”

Meanwhile, Reynolds hasn’t completely shut off contact with his famous ex, Johansson, 26. He and the Iron Man 2 actress were spotted having a cordial dinner last Friday at Little Dom’s in L.A., an observer confirms.