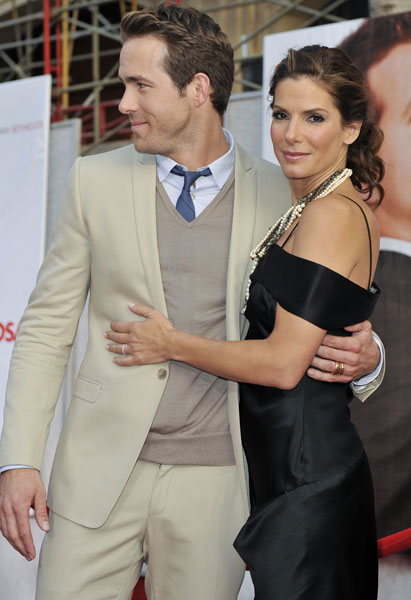 Sandra Bullock and Ryan Reynolds are officially dating. Although they have known each other for years, are both divorced, and regularly go on holiday together – people were not certain if they were actually a couple.

Following the trend in Hollywood, Sandra is 13 years Ryan’s senior and the couple have been hot and heavy for weeks.  In fact the two are so close that Sandra’s adopted son Louis now even calls Ryan ‘Daddy.’

Sandra Bullock and Ryan Reynolds will collaborate on new animated TV show ‘And Then There Was Gordon.’  The show is about an ordinary child surrounded by his prodigy siblings and brilliant, but neurotic, mother set to be played by Sandra, who will also executive produce while Ryan will voice a character and co-write the script with ‘Just Go With It’ writer Allan Loeb.

Sandra and Ryan will also reunite on the big screen with ‘The Proposal’ writer Pete Chiarelli and director Anne Fletcher on in ‘Most Wanted.’

Hopefully the family that works together stays together.