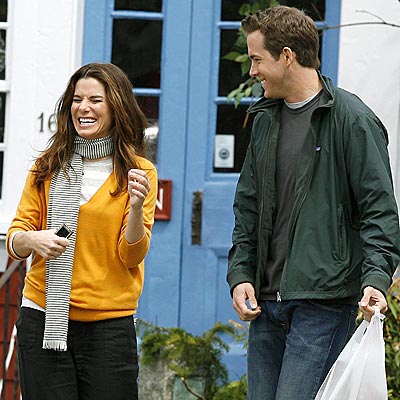 Sandra Bullock has a ranch in Wyoming where she and new rumored flame Ryan Reynolds have been playing cowboy and cowgirl.  They also spent a romantic New Year’s Eve together at the restaurant Sandra owns in Austin, Texas.

Wow, Sandra sure owns lots of stuff!  Hopefully that is not a major part of her appeal to young Ryan.  Ryan who recently split from Scarlett Johansson is 12 years younger than Sandra who is almost 20 years older than Scarlett.

“She feels very comfortable having Ryan there with her.  Sandy and Ryan are just enjoying spending time together. They have known each other for years and they have a built-in familiarity.   It’s great to see Sandy with a true smile on her face. Ryan has made at least two trips to Jackson Hole during the holidays, and her friends except more to come.”

I guess Ryan is grooming himself for a remake of ‘In Praise of Older Women.’