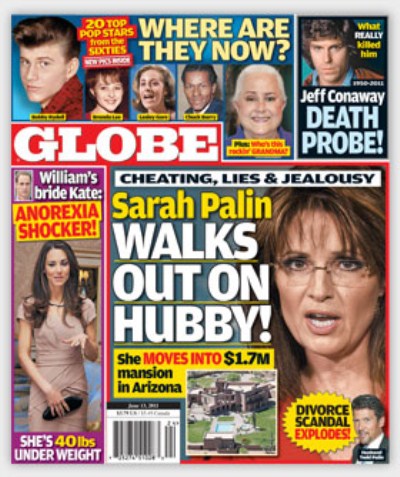 America’s Globe magazine is running a story that claims that according to reliable sources Sarah Palin and Todd Palin are planning to divorce – and soon!

Rumor has it that Sarah Palin has finally had it with her hubby.  Apparently, the former GOP vice-presidential candidate, former TLC reality star, and possible 2012 presidential candidate has “walked out” on her husband and she’ll soon be moving into the brand new $1.7 million mansion that she recently bought in Arizona.

This is not the first time divorce rumors have circulated about the couple, in 2009 it was widely reported that they were getting divorced after the National Enquirer printed a story exposing previous affairs on both sides.  These affairs were said to have led to a deterioration of their marriage and the stress from that was said to have  led to Palin’s resignation as governor

Confirmed: Bristol Palin Is Getting Her Own Reality Show!

This time round, exactly what prompted the ex-governor to decide to give Todd Palin the boot after 21 years of marriage is unclear.  Regardless of the details, the Palins’ imminent split sounds very messy – allegedly replete with “cheating, lies, and jealousy.”

If the divorce and split are really going to take place soon wouldn’t that put Sarah’s plans to be President off the road?