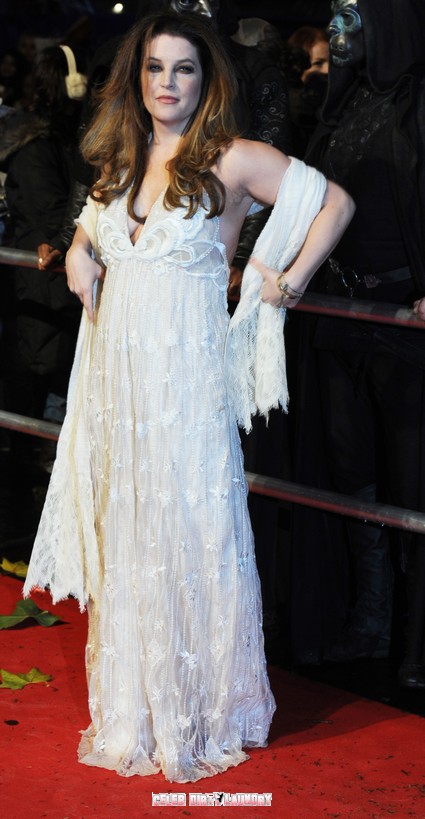 Lisa Marie Presley turned to fellow Scientologist John Travolta is despair during her emotional meltdown.  The 43-year-old daughter of Elvis Presley buckled under the pressure of trying to revive her failing music career, being a mom to her 2-year-old twin girls, Harper and Finely, and all the while struggling to lose weight.

According to the National Enquirer: “All of Lisa Marie’s problems came to a head in a perfect storm of stress – from readying her new CD to her never-ending battle to stay thin and the constant de­mands of the twins,” a family said.  “After Elvis’ death, she’d vowed to make her daddy proud of her as a performer. But her musical efforts have fall­en short.”

About two weeks ago, she crumpled emo­tionally over her music come­back, said the source.

“I think Lisa Marie prob­ably knows this album with producer T Bone Burnett is really her last chance for a showbiz hit,” the friend confided.  It’s been six years since her last record, and this one is a do-or-die project.”

Lisa Marie is also freaking out over her recent weight gain, said the source.   Lisa Marie dieted from 165 lbs. down to a too-skinny 110, shedding 55 lbs. in just five months. She’s regained at least 20 pounds since then but has been drinking protein smoothies and avoiding sugar, trans fats and white bread in a bid to slim down again, said the source.

“Lisa Marie fluctuates between trying to live healthy and then going back to eating and drinking almost whatever she wants,” said the source. “She could be getting caught up in a nightmare cycle of yo-yo dieting that would be dangerous to her health.”

Feeling her life was spinning out of control, she turned to Travolta for support.  “John’s been a father figure to Lisa Marie for years,” ex­plained the friend.

“Not only are they both Scientologists, but he’s well-versed in showbiz pressures. No one knows more about comebacks than he does, and John gave her the courage to go on.”

Travolta also allowed stressed-out Lisa Marie and hubby Michael Lockwood, her musi­cal director, to take a break from their current home base near London, England, and offered them the use of his Bahamas vacation home.

“They packed up the twins and headed off to the Bahamas,” said the friend. “Lisa Marie found it incredibly calming.”