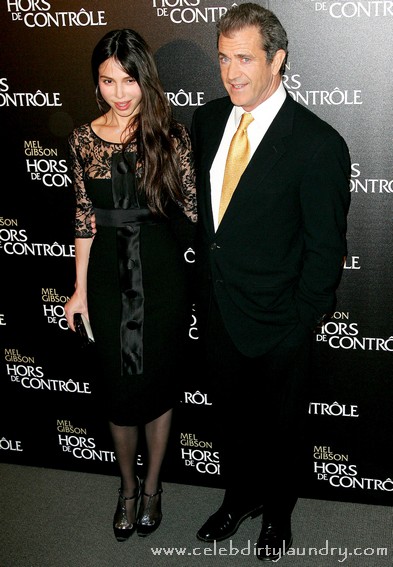 Lawyers for Mel Gibson and Oksana Grigorieva met face to face last week in a last-minute bid to settle the former lovers’ infamous dispute.  But no resolution was reached at the meeting, a source tells says which means they are still on course to file civil lawsuits against each other as they battle over their daughter Lucia and money.

Apparently a major stumbling block is that Oksana wants Mel to publicly admit he assaulted her.  “Mel simply won’t do that,” the source said.  “The custodial terms and financial arrangements for Lucia and Oksana could be secured quite easily, however it is the confession of liability which one could suggest is the equivalent of a brick wall.”  Even though Mel pleaded no contest to a misdemeanor battery charge against Oksana, he did so in a way that is not an admission of guilt in a civil case.

The lawyers’ talks were extensive and one source with knowledge of situation said he was pessimistic about a possible resolution.  “The two parties are at an impasse and it seems incredibly unlikely a settlement will be done in the matter,” the insider said.  “Both sides came to the talks optimistic the case could be finalized, somewhat peacefully after everything they’ve been through, but everyone left the meeting with no doubt there is a significant amount of distance between them.”  “Bottom line: the court battle will continue.” Gibson has indicated he will sue Grigorieva for extortion, even though law enforcement authorities decided against filing criminal charges against her.

Grigorieva previously turned down Gibson’s $15 million settlement offer in June.  If Oksana is looking for her idea of justice then she better forget about it.  Movie stars with Mel’s resources in Los Angeles tend not to be treated harshly by the legal system.