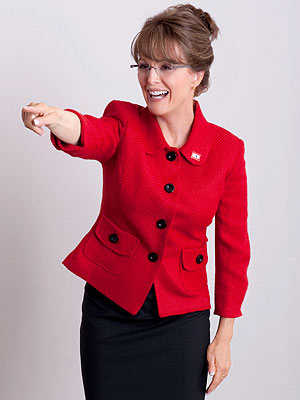 We’ve already seen still photos of Julianne Moore dressed in character as Sarah Palin for the upcoming HBO movie, Game Change, but, now, in a teaser preview for the flick, we get to hear her speak!

Based on the bestselling book of the same name, the film, which will premiere in March 2012 on the cable channel, centers on the 2008 presidential election and John McCain‘s choice of a VP candidate. Ed Harris, who plays the Republican presidential nominee, and Woody Harrelson, who plays an adviser, also star in the film.

“In terms of the research I did on the way campaigns are conducted, so much is about how do you get on the air, how do you get the most media attention, how do you make the most noise,” Julianne told ABC News. “When in fact, what we’re all looking for is leadership, we don’t want noise. We want people who are going to take care of us.”