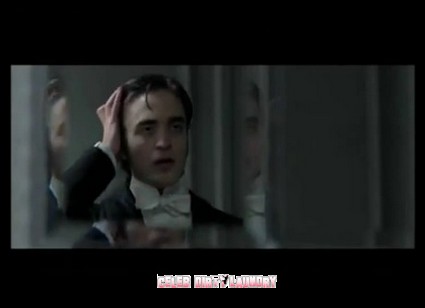 Robert Pattinson has been at 2011 San Diego Comic Con to support The Twlight Saga: Breaking Dawn.  Just one day after we got to preview Robert as Edward Cullen in Breaking Dawn a teaser trailer for next  film ‘Bel Ami’ has leaked.   In the trailer Robert is not Edward Cullen he plays a womanizer and if you think the leaked sex scene in Breaking Dawn was hot you have to watch the Bel Ami one.

Roberta plays a penniless soldier who’s trying to break into society. It turns out Robert with his good looks and irresistible charm finds he has some skill when it comes to entertaining the wives of powerful men at the core of Parisian society.  In the video we see Robert courting Uma Thurman, Christina Ricci and Kristin Scott Thomas.   There is a lot of love-making going on.

Enjoy the video below and let us know what you think in the comments below!