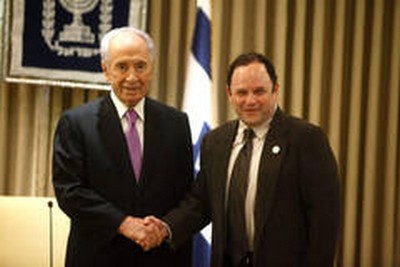 Former Seinfeld actor Jason Alexander who played George Costanza is playing a much more serious role in promoting peace in the Middle East.

Associated Press reports that Alexander, who played George Costanza in the legendary sitcom for a decade, was asked by Israeli President Shimon Peres in a meeting on Tuesday for advice on how to solve the Israeli-Palestinian conflict.

Alexander said, that through comedy and humor, he hopes to help advance the idea of two states for two people.

Peres playfully asked the actor if he could call him “George.” Alexander laughed, and pointing to a crowd of reporters, said: “You can. Not them.”

He met with Peres during a visit to the Holy Land with a delegation from OneVoice, an international grassroots group working with mainstream Israelis and Palestinians to encourage peace.