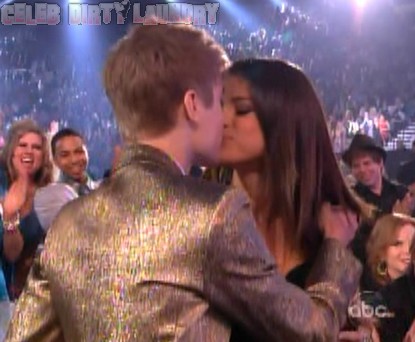 During the MTV Movie Awards on Sunday, teen singer Justin Bieber and his girlfriend, Selena Gomez shared a smooch. Apparently that has left some fans “weirded out.”

After the ceremony, the happy young couple went backstage where they were said to be unable to keep their hands off of each other. Some who were in attendance said that they were uncomfortable at their public display of affection.

A source said, “They made out for about three minutes and kind of weirded people out. They used a lot of tongue and acted like there was no one else in the room.”

Recently, Justin took Selena to his hometown of Stratford, Ontario, where they met up with his cousins and aunt and uncle. A source said, “Justin and Selena had lunch with Justin’s cousin and his aunt and uncle. They were really sweet and make an adorable couple. They looked happy and in love. They acted just like everyday people, very down-to-earth. Justin is part of the community, he’s one of us and is as friendly as can be.”

Alright kids, if you’re going to kiss in public, please at least be considerate for others who are in the room. Okay?