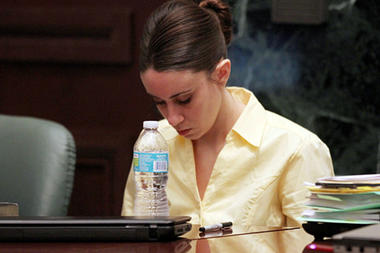 In a shocking decision Casey Anthony, 25,  was found not guilty of murdering her daughter Caylee Anthony. One has to wonder how a jury of five men and seven women came to this decision.  In her closing statements Assistant State Attorney Linda Burdick said:  “My biggest fear is that common sense will be lost in all the rhetoric of the case, that you won’t step back and take a look at the evidence as a whole.”

It looks like she was right, rather than be found guilty of murdering her two year old daughter she was found GUILTY on four counts of providing false information to a law enforcement officer.

Casey looked nervous while she waited for the verdict, biting her nails and fidgeting since if she was found guilty she could have faced the death penalty.

What a horrible verdict, I can just see it now Casey will probably make a fortune doing the talk show circuit ughhh..Despite the not guilty verdict, I don’t think we will be seeing the Casey Anthony day care center opening any time soon!  What do you think of this sentence, a miscarriage of justice or fair?