Snoop Dogg And Charlie Sheen Hook Up In Recording Studio 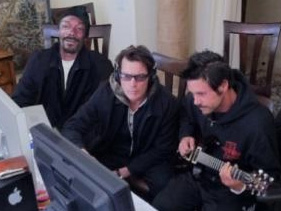 Snoop Dogg has teamed up with actor Charlie Sheen in the recording studio, imagine all the dope these two can go through!  The former Two and a Half Men star recently made a big splash in the twitter world after signing up for the microblogging site.  So I guess he wants to further take advantage of his growing popularity by moving into the music business.

The actor has now tweeted that he is in the studio with rapper Snoop Dogg.

Under a picture of himself with the rapper and a producer, Sheen wrote: “Warlock meets his makers-music makers that is @SnoopDogg @robpatterson666 get ready to rock the Sheenius within! (sic)”

No release date or further details have been announced.

Sheen has embarked on a number of projects following the recent revelation that he has no chance of being re-hired for ‘Two and a Half Men.’   The actor has reportedly filed a $100,000,000 lawsuit against Warner Brothers and producer Chuck Lorre.  Still, with his crazy expensive lifestyle he’ll need plenty of income tide him over – a lawsuit like that will be in court for years.