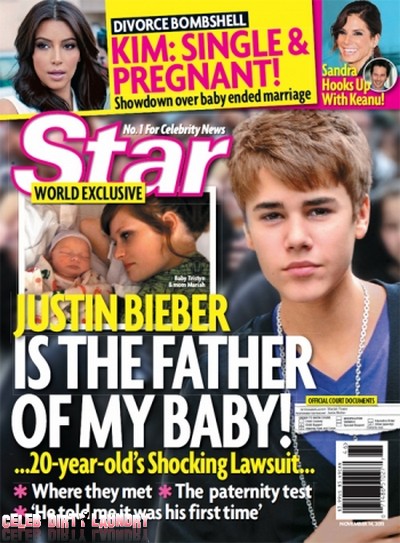 Star Magazine’s cover highlights the claim of Mariah Yeater that Justin Beiber is the father of her 3 month-old child and has a photo they claim is of the Maria and baby!  Of course Star Mag broke this story so one has to wonder… .

Of course this claim is unsubstantiated but Maria has signed an affidavit under penalty of perjury that says she was just 19 years old when she had sex with the underage star backstage at one of his concerts in L.A. – she has filed a lawsuit alleging that Justin Bieber fathered her three-month-old baby boy.

Justin Bieber‘s legal team has reacted to that allegations calling them “malicious, defamatory, and demonstrably false.”

His team adds: “While we haven’t yet seen the lawsuit, it’s sad that someone would fabricate malicious, defamatory, and demonstrably false claims. We will vigorously pursue all available legal remedies to defend and protect Justin against these allegations.”

As we made clear when the story broke yesterday the truth of the allegations are readily available and a paternity test will provide it for all to see.