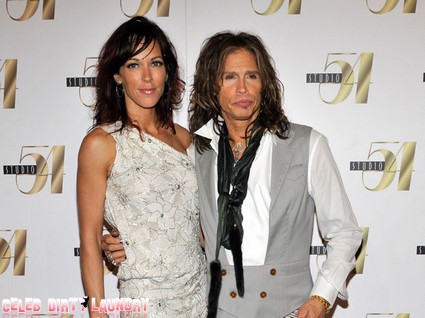 Steven Tyler‘s family aren’t keen on his engagement to a woman 25 years his junior. The Aerosmith singer and American Idol judge popped the question to his longtime girlfriend Erin Brady over the weekend. But the move is threatening to tear the Tyler family apart.

As TMZ is reporting some of Steven’s relatives hate his bride to be. They’ve said she’s not nice and mean to the family. And if the Rock ‘n’ Roller thinks they’ll get used to her – he can continue to ‘Dream On‘. That’s not a good start for any marriage!

There’s no word on exactly which family members are upset. Is Liv Tyler happy with her future Stepmum? At 38, Erin is less than five years older than the actress.

Apparently the secret proposal didn’t go down well with the Tyler family either. They would’ve liked a heads up before he got down on bended knee. Finding out after the event has caused even more friction. Sources have told TMZ… the family members were hoping they could patch things up with Erin but now that’s looking increasingly unlikely.

As Celeb Dirty Laundry reported yesterday the performer is no stranger to marriage. This will be trip number three down the aisle. He married Cyrinda Foxe in the late 70s. Their relationship lasted 10 years. He then tied the knot with clothing designer Teresa Barrick. That union ended in 2005. Erin Brady came on the scene in 2006.

Only time will tell if this relationship has a happy ever after. Steven Tyler is yet to comment on the reported family rift.