Survivor: Redemption Island Week One Recap & Who Was Voted Out? 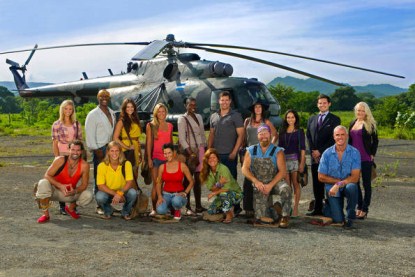 Tonight the battle began to unfold in on Survivor: Redemption Island in Nicaragua where the 18 castaways will be divided into two Tribes of nine: the Ometepe Tribe and the Zapatera Tribe.  Each week our guest blogger Rosie from Fit Fab Celeb will be doing a recap of the show and all the happenings.

So let’s get started –  The contestants arrive by helicopter, a group of strangers and only one will be able to claim the prize. 39 days, 18 people, one survivor.

16 contestants got off the first helicopter and separate on two mats.  One guy is dressed in a business suit?   Has he not watched one of the previous episodes?   Jeff announces to the group that two more contestants are arriving in a different helicopter and out come former contestants Boston Rob and Russell; together they have 165 days of survivor experience.

They choose buffs, old school, to determine the teams. Rob chooses the Ometepe buff and Russell, Zapatera.  Jeff surprises the contestants with a twist; whomever is voted out in tribal council will not go home, they will go to redemption island and live alone to take care of themselves with basic supplies. When the next person goes to Redemption Island, the two will square off and the winner will stay there until the last person standing will return to the game and fight for the million dollars.

At Zapatera, Russell decides to share some of his wisdom and experience with his team mates, even though he’s never won! The team mates get right to the business of building a shelter.

At Ometepe, the team mates feel that it is a blessing to have Boston Rob and nickname their tribe, Camp Harmony. Philip Sheppard is being branded early on as being the most annoying, in your face kind of person.   He goes on to brag that he is a Federal Agent and can read people, the whole tribe looks at him completely unimpressed and they find him more of a comic relief than anything else. Rob catches Kristina Kell looking for an idol at the onset of the game – the guy is too sharp to try anything behind his back.   Kristina doesn’t give up; she keeps trying and ends up finding an idol.  Philip falls into argument with the ladies over the deciding of whom to vote out and his aggressive attitude gets under all of their skin.  Francesca Hogi frustrated Philip, said she doesn’t understand how she ends up with the older guy in droopy briefs, lol, referring to Philip.

Back at Zapatera, Stephanie Valencia falls into Russell’s trap, or so he thinks, she actually just follows along with his game play to amuse him. The contestants are all aware that Russell is a huge threat and see him gravitating towards the young pretty ones that he can manipulate.

The tribes arrive at their first challenge; Jeff explains the rules and tells them that the winning team will win immunity and fire. The teams have to work together to move huge blocks that form a staircase that they have to put together, climb to the top and solve a puzzle to win. Zapatera makes a good start, but Ometepe’s patience moves them ahead when it comes to the puzzle portion of the challenge.   In the end, Zapatera wins.

Back at Ometepe, Kristina makes the first dumb move and tells Francesca that she found the idol. Kristina has her heart set on voting out Boston Rob and he wants to vote her off because he finds she is too sneaky & dangerous because he caught her looking for the idol; both campaign against each other. Philip, talks game plan with Kristina and calls the first few days of being on Survivor a “heighted state of arousal” which prompts Kristina to tell him about the idol!   Two morons. Philip decidedly believes Boston Rob has to go and he needs to be the new leader.

At tribal council Jeff asks Rob how things go at camp and quickly realizes that Philip believes that he is the leader of the tripe. He discusses the game with the contestants and Francesca tells Jeff that Rob is not going home and Phillip cuts in to tell everyone that Kristina and Francesca approached him to vote out Francesca. Kristina eludes to the fact that Philip is unstable and Philip then lets the cat out of the bag that Kristina has the idol. Philip is hilarious, he can’t say the name Francesca – he sounds like Elmer Fudd.

Rob calls out Kristina to give him the immunity idol and she refuses – so he calls her a liar.  When Rob casts his votes he calls the other contestants amateurs and thanks them for the memories, lol.

Who got the votes:

Who got voted out & sent to redemption island:  Francesca Hogi – whose parting words are “Don’t trust Phillip” 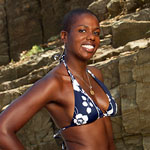 Come back next week for the week 2 recap……Rosie