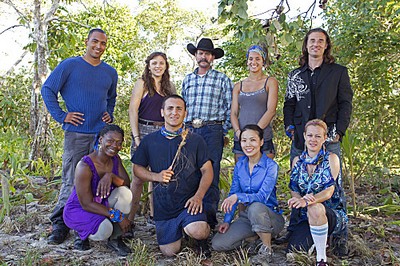 Survivor: South Pacific returns tonight on CBS.  This is the eleventh episode of the 23rd season and it is called ‘A Closer Look.‘  On last week’s episode it was a double elimination and Dawn and Whitney got voted out and have headed to Redemption Island.  If you missed last week’s episode you can read our official recap here!

The girls will join Ozzy on Redemption Island.  Ozzy seems to be happy and thriving on Redemption Island as he says he gets plenty to eat and rest and he believes he is in fighting form for the challenges. Ozzy has taken so many risks this season it will be interesting he to see if they all pay off.  Redemption Island is a good place for someone like him because he has the skills to survive on his own.  He feels confident he can beat anyone who gets sent to the island.  What do you think is Ozzy getting too confident?

Tonight’s Survivor will be showing  never-before-seen clips and give an inside look into the castaways and their decisions made during the game so far.  What this decodes to is NO new episode.   With it being Thanksgiving week, people celebrating and travelling CBS did not want to take a chance on not having enough viewers tune it.

Meanwhile after last week’s episode there seems to be a crack in Coach’s alliance, Albert looks like he is thinking of making some changes.  During Tribal Council when it was suggested Coach was the leader of the tribe, Albert piped up and made it clear he did not think Coach was the leader.  I wonder how that is going to play out?   Which are you team Coach or team Albert?

So far on this season we have two jury members, Keith & Jim,  Whitney, Dawn and Ozzy on Redemption Island and seven contestants left in the game.  Come back to visit us next week where we will be live blogging the new episode with up-to-the-minute results!

Check out the preview video below of tonight’s never-before-seen clips!