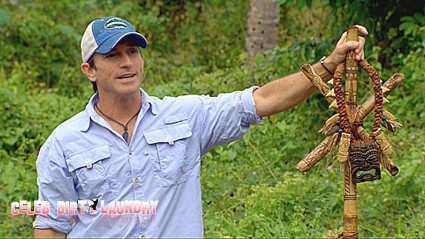 Survivor: South Pacific season 23 returns tonight with a whole new episode on CBS.  Tonight is the twelve episode and it is called ‘Cult Like.’  Stay tuned as we cover the official recap of show with up-to-the-minute details.  On last week’s episode they showed  never-before-seen clips and gave an inside look into the castaways and their decisions made during the game so far.  What this decoded into is NO new episode.

Episode Synopsis: At the immunity challenge, one tribemate makes a big gesture to a fellow castaway. Meanwhile, an alliance member becomes a liability around camp, on SURVIVOR: SOUTH PACIFIC, Wednesday, Nov. 30 (8:00-9:00 PM, ET/PT) on the CBS Television Network.

Dawn and Whitney are now on Redemption Island with Ozzy.  Ozzy seems to be happy and thriving, he says he gets plenty to eat and rest and he believes he is in fighting form for the challenges. Ozzy has taken so many risks this season it will be interesting he to see if they all pay off.  Redemption Island is a good place for someone like him because he has the skills to survive on his own.  He feels confident he can beat anyone who gets sent to the island.  The question tonight is can he beat Dawn and Whitney.

Tonight’s show:  The tribe returns to their camp and their are seven left.  Coach realizes that they are going to have to start voting off his family members soon.  Cochran thanks the tribe for adopting them into his family, but he realizes the family could turn on him in one minute.

Sophie sees why people got annoyed with him, she originally felt sorry for him.  She does not like Cochran she feels he is too proud of the moves he made.  Cochran on the other hand thinks the remaining members are like a cult.  Cochran thinks that Brandon is scary devout.  Cochran wants to remind them of the risks he took.  Cochran gets all the people together and tells them how he made a big sacrifice for the Upolu tribe and he thinks they owe him to keep him another week.  He tells them it is his birthday in three days so it can be his birthday present.

Albert says he is not going to say much because he thinks Cochran made a valid point.  Coach agrees that they owe Cochran another day.  They have to convince one more person to agree with them.

Ozzie can survive on redemption island – he loves it there and is well suited for it. Albert is talking about his team – poorly – he thinks they dont get the social game -he leaves the house work to Martha Stewart.

Brandon caught a scary fish – Cochran is terrifiied the coward – Cochrane is blabbing about what ateam player he is. Brandon is a religious fanatic and Cochrane distrusts him – Edna hates Albert since he ruined her laundry – she says Al is lazy as heck – Coach also says Al is a lazy lout – The Rickster is also pissed at Albert for being lazy.

Edna is spying with Coach -she is trying to influence Coach that she should not go after Cochran – who is the man on the totem. Coach wants to keep the two weaklings Edna and Cochran since he thinks they won’t vote him out.

Coach is doing the meditation with Cochran – Coach is stupid enough to think that Cochran is his student – Cochran will turn on him in an Harvard minute!

Immunity Challenge time!! Deja Vu – toss sandbags – first 3 move on to sling shot round – then winner gets immunity – they also get a nice spa afternoon. Round one – first 3 move on – they need 3 bags to qualify… Sophie, Coach and rick are winnign so far – Albert moves to round 2 – Rick moves to Round 2 – Sophie too. So final round – Sophie, Al, Rick, they have to sling shot coconuts to break all 3 targets!  Ricks in the lead…Al and Rick are tied… Albert wins immunity!!!  Lazy or not he is safe.

Albert picks Coach to go to spa = but Albert offers his reward up!! He gives it to Cochrane – so Coach and Cochran are going to the spa – hmmm…

Coach and Cochran at the spa – they shower before their massage – This was Cochrane’s first massage ever.  Has he ever been touched?  Maybe at the Dr’s… .  Coach wants Cochrane to be saved tonight.

Cochrane now is plotting with Albert – Albert admits that Cochrane is at risk.  Albert wants Rick gone – Albert wants to see Cochran stay and Rick go – Rick called him Princess Albert.   Edna wants to agree with Cochran and Albert to convince Coach to agree and get rid of Rick.  An allegiance is forming to get rid of Rick – or so it seems.

We will see as they head to tribal council.  At Tribal Council they bring in the jury – Kieth, Dawn and Whitney.  Coach is blabbing as usual -Cochran tells everyone he felt the scrambling – he feels he is owed a debt – he wants to survive.

Albert agrees with Cochran and so does Coach – It was Cochran who helped them get to this point by betraying his tribe.  Edna is moaning as usual – she thinks she is sixth… .  Brandon says he is voting out Cochran now and Edna next.  Brandon is sticking to the plan and he tells everyone.  Brandon says that his own desire to do ‘wrong things’ is his biggest enemy.  He is a real nut job.  Cochran says that talking to Brandon is a waste of time – Brandon does not believe in strategy.

Sophie is playing it cool.  Albert has immunity – time to vote.  Cochrane votes Rick so does Edna the snake,  what will the outcome be.  Nobody plays an immunity idol – vote 1 – cochran- rick rick cochran – cochran – cockran

Now Cochrane goes to redemption island… .  Now there are 6 – and Cochran and Ozzie are on Redmeption Island and will battle it out next week!

See you next week!