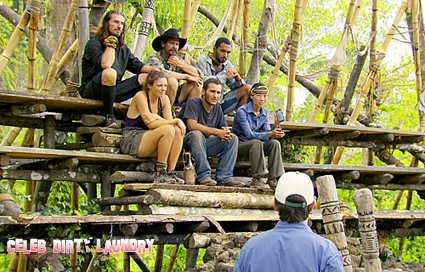 Survivor South Pacific returns tonight with a whole new episode.  Tonight is family night on Survivor and we get a peek at each of the remaining survivors personal life.  The episode is the 13th in the 23rd season and it is called ‘Ticking Time Bomb.’ When I saw the title of tonight’s episode I have to think the time bomb is Brandon and tonight’s episode is probably all about him.  That guy is all kinds of crazy and the tribe is realizing it.   He is a real nut job and during last week’s immunity challenge he said, “his own desire to do ‘wrong things’ is his biggest enemy.”   Last week the snake Cochran was voted off and now he is at Redemption Island with Ozzy.  If you missed last week’s episode you can read our official recap here!

Episode Synopsis: A relative crosses the line during the emotional family reunion, and an unlikely secret alliance threatens the pecking order of the Te Tuna tribe, on SURVIVOR: SOUTH PACIFIC, Wednesday, Dec. 7 (8:00-9:00 PM, ET/PT) on the CBS Television Network.

Ozzy is happy and thriving on Redemption Island, he says he gets plenty to eat and rest and he believes he is in fighting form for the challenges.  He has managed to win every challenge thrown at him.  Last week’s challenge between Ozzy, Dawn and Whitney was a tough one but again Ozzy took it.  Tonight Ozzy will have to face Cochran in a challenge.  The winner of the challenge seems a forgone conclusion, but on Survivor you never know.  Will tonight be the end of Cochran’s wheeling, dealing and conniving?  Stop by this spot tonight to find out!

Come back tonight at 8PM where we will be live blogging the episode with up-to-minute-results.  Make sure to refresh often and enjoy the recap!

Tonight’s show:  Cochran arrives at Redemption Island and tells Ozzy that he has been screwed.  Ozzy tells him he has a way for him to get back at Upolu.   Ozzy tells him when he gets on the jury he should vote for him and not Coach.  Cochran takes exception to this because he does not like the fact that Ozzy is assuming he will win the challenge on Redemption Island.  He tells Ozzy he is not ready to commit to that and tells him he may win the challenge.  Ozzy tells him if Cochran beats him and he leave and is on the jury he will vote for Cochran to win.  He asks Ozzy if he thinks tht he can beat him in the challenge and Ozzy says ‘you could.’ Then when Cochran is not listening he says he does not stand a chance.

Brandon asks everyone if they can say a prayer before the morning starts.  Edna walks up and says because she is not part of the tribe she is not staying for the prayer.  She leaves and she is upset, she feels like she is being treated like a second class citizen.  She tells Coach how she feels and that she does not like Brandon dictates her.

They get tree mail and find out they are getting videos from home.

Redemption Island Arena Duel – Jeff tells Ozzy and Cochran there is a twist to today’s duel.  They will use grappling hooks to hook 3 bags.  They have to take the bags back to a platform and remove a ball which they have to work through a table maze.  They have to do this 3 times.  it was a close challenge but Ozzy won the challenge.

Cochran says he is not the person he thought who he was- he almost beat Ozzy – it was THAT close. Ozzy won again – and they made the task as easy as possible for Cochran.

Now the survivors are meeting their families – at least members of their families. Always hated this part of the show – like who cares – it’s not as though these folks have been missing for years. Lots of tears – especially crazy Brandon and his dad – boo hoo – let’s get back to the game. Ozzy gets to choose – and he chooses Albert and Coach and Brandon to spend time with their visiting family member – the others have to say goodbye. Poor Rick, poor Edna, and poor Sophie… this makes no difference – except maybe to give people more reason to hate Oz or love him, as the case may be.

Coach wants to take Ozzy to final 2 or 3 and he says it to Oz ‘as a Christian man.’ Brandon is still a loony and his dad is trying to convince him to be a snake – the family tradition. His dad wants his son to be a rat – to do what it takes to win money – no matter whom he has to screw over… nice! Coach is telling his dad that he will take his son far – the dad is trying to manipulate Coach into helping his son. Brandon’s dad says that he is telling his son to listen to coach no matter what. Coach hates Hantz senior and tells the camera it might be time for Brandon to go… Yikes! Things are looking up for Edna.

Immunity challenge time – Albert gives up the immunity idol. The have to stay standing on a giant puzzle – once they run out of yellow tiles they are out. Sort like chess but it seems they are ganging up against Edna – but its Albert out first, then Brandon. Edna feels that Brandon moved just to get her out so that she can’t get immunity and Brandon as much as said so. Rick is gone. Sophie too is out. Edna loses as well. Coach wins and gets immunity. Edna is bitching a mile a minute about how unfair it is that she is not in the ‘inner 5.’ Funny how she never felt a thing as others got cruelly done in. We despise Edna – a miserable snake is what she is.

Sophie is figuring that Brandon is a moron – why should he make Edna feel even worse. Rick agrees. Now Brandon the moron is apologizing to Edna – and she does not accept his apology. Brandon is hated – people are not as forgiving as JC according to Sophie. There is a movement to dump Brandon. Edna is trying the best she can to convince the gang to go against Brandon. Edna is a desperate rat – she says vote Brandon out – Coach is acting like he is convinced by Edna and might vote Brandon off. Edna asks Coach for his idol – he says NO! Edna is trying to get Al and Sophie to vote Brandon off – she says that Coach is on her side. Al talks like he might be swayed. He says Brandon might have a big surprise tonight… .

So now the jury is there and Edna is bad mouthing Brandon. All nonsense. Brandon is being cool – claiming he open and honest. Brandon is now talking Edna down. Sophie and Albert hint that they might vote out Brandon.

Now the vote – who will join Ozzy on Redemption Island??? Jeff is tallying the votes. Edna, Brandon, Edna, Edna, Edna – YES – Edna is voted out.