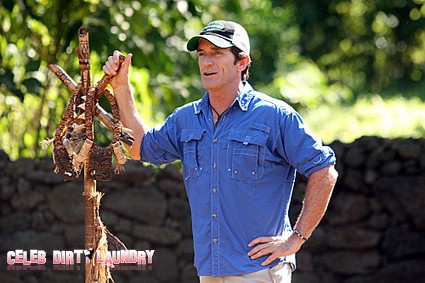 CBS airs an all new episode of Survivor: South Pacific tonight and it is the 14th episode of the 23rd season is called “Then There Were Five.”  Stay tuned as we cover their official recap of show with up-to-the-minute details.  On last week’s episode Edna tried her best to get the remaining tribe members to change their minds and keep her another week.  All her pleading did not help and she was voted out and now heads to Redemption Island to duel it out with Ozzy.  If you missed last week’s episode you can read our official recap here!

Episode Synopsis: Tensions escalate at camp when the final five original Upolu members are forced to turn on each other. Meanwhile, on Redemption Island, Ozzy and Edna compete to stay in the game, and one becomes the sixth jury member, on Survivor: South Pacific, Wednesday, Dec. 14 (8:00-9:00 PM, ET/PT) on the CBS Television Network.

The question tonight is can Ozzy keep winning on Redemption Island.  Last week his challenge with Cochran was very close.  Can Ozzy beat Edna tonight?  I hope so, but you never know.  Now that there are five members left of the original Upolu team they have to start eliminating each other.  Will they stick to their original plan or will they start forming other alliances fast?  Stay tuned tonight to find out.

Come back tonight at 8PM EST to this spot, we will be live blogging the episode with up-to-minute-results.  Make sure to refresh often and enjoy the recap!

Tonight’s Episode:  The final five head back to the camp and they are happy.   They did what they said with honor and dignity.  Brandon suggests they all pray to give thanks for where they are.   Coach says the real game starts tonight.  Albert is thinking about a blindside, it should be interesting.  It looks like the men may be sticking together.

Sophie and Coach are talking, meanwhile Albert is getting nervous taking Sophie to the end.  Alberta talks to Rick and tells him they have to be careful.  Albert says if he was getting rid of the people he did not like he would get rid of Rick.  But, he thinks Rick would be good to go to the final 3 with because he has done nothing in the game.

Redemption Island – Ozzy will battle against Edna to stay in the game and continue the quest to still win the money.  They mus  race to complete a slide puzzle.  Once they finish the puzzle it releases a hatchet.  They use the hatchet to cut a rope that holds a bag with puzzle pieces.  Then they take the pieces and solve a puzzle.   Ozzy is first out and way ahead.  Edna is not getting it but the people who voted her out start to help her and she gets her hatchet out.  Edna gets to the puzzle with Ozzy and all the five remaining members are helping Edna and poor Ozzy is all alone in the game.  It is basically six people against Ozzy.  It does not look good for Ozzy.

Ozzy wins immunity despite everyone’s attempt to screw him.  Edna is eliminated and it is time for her to go.  Ozzie is the best – we love Ozzie – nobody comes close in skill or character – he deserves it all – Brandon is a slimy freak who needs to GO!

Albert talks – blabbing about honor and integrity. Brandon and Al and Coach – that is what Brandon thinks. Al is ready to screw Brandon at any time. Al is planning to dump Sophie. Brandon is such a moron – he thinks god wants him to do things, like win survivor..

Sophie is talking to coach and wants to get rid of Brandon – she figures he is good to beat her in the final. Rick and coach make a deal to vote out Brandon… Al wants coach to vote Sophie off – saying correctly that she is less reliable than Brandon – coach thinks Albert is afraid of Sophie’s intellect… .

Coach is trying to get off Brandon – but Albert is opting for Sophie. Now Brandon is pissing off Coach – asking what he and Al were chatting about – Coach is flashing back to Uncle Russel – Brandon apologizes for prying too much. I hate Coach – he is a rat and snake but full of self-righteousness.

Immunity challenge – climb a wall by rope to get 5 bags – 3 of the pieces will not match up – they indicate a number code – which will allow one box to be unlocked first – plus the winner gets pizza and garlic bread delivered to camp.

Coach and Brandon and Rick are ahead. The have to find the 3 pieces that don’t match. Brandon and Coach neck and neck. Brandon heads up – Coach just behind. Brandon wins!!!

Good for him – he was at risk for sure!! Brandon wins immunity – and he gets a pizza menu – he has to choose one other to eat also –he chooses Rick – cowboy –good move. Coach says it was divine intervention – who is wackier, Coach or Brandon – divine intervention… it just wasn’t Brandon’s time to go home.  Anyway – now they can’t vote Brandon off at tribal council.

Sophie is thinking with Coach to vote off Albert – since Brandon is immune. The pizza is delivered – and Sophie is smelling the pizza and tells Rick and Brandon she is voting Al – Al knows it. Brandon knows Al can’t be trusted. Brandon is questioning Al and Al is lying – now Rick is calling Al a liar saying that Al spoke to vote Brandon off – Al is caught! Sophie is gloating at Al – she is making fun of him. Al is cooked – they know he is a scheming rat – Al will try to get Brandon back on his side. Brandon loves Al and he is thinking of forgiving Al… Brandon is struggling to keep Albert in the game. Brandon believes that he might give his immunity necklace to Al – to save him. Brandon is telling Coach his plan. Coach is freaking out – Brandon brings in forgiveness says Coach. It’s up in the air now.

Coach is going to pray – seeking god’s answer as in whom to vote off the game. These people are INSANE. Coach says his soul is grieving.

Comes the vote – what will happen? Will Brandon give immunity to Al? He gave immunity to Al – what a fool. Brandon has prayed – now his loyalty might backfire – will they vote off Brandon? Brandon might well be voted off – the jury is laughing at him – they do not buy this religious mumbo jumbo – Al is also playing the ‘Christian Man’ card.

They all know coach has a hidden immunity idol. Brandon senses he is not secure. Talk of Al giving the necklace back – but that would never happen. Hearing Coach talk about himself and God is enough to make me barf.

That is it for tonight, Brandon has to have made the dumbest move in Survivor history!!! What do you think of what he did???

Come back Sunday at 8PM EST Sunday December 18th, 2011, where we will be live blogging the 2 hr season finale with the up-to-the-minute results!