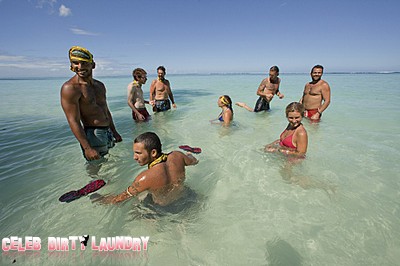 Tonight is the eighth episode of Survivor: South Pacific and it is called ‘Double Agent.’  On last week’s episode Ozzy allowed himself to be voted out on purpose in the hopes of winning over jury members and winning enough challenges to go back into the game right before the finals.  Ozzy gave his immunity idol away and had Cochran promise to give him back when he comes back in the game.

Tonight we will find out if Ozzy’s move was the smartest or the dumbest move ever made on Survivor.  Host Jeff Probst called it a “crazy move.” “Crazy move, right?” Probst tweeted. “I dig it. I respect big moves.  This would have to be one of the biggest and riskiest moves in (Survivor) history, right?”

Ozzy does dominate the challenges but there is no guarantee he will be able to win against Christine who has won the past five challenges on Redemption Island.   You can never tell what is going to happen Survivor is always unpredictable.   If you  missed last week’s episode you can read our official recap here!

Episode Synopsis: With a potential merge on the horizon, one tribe puts on an elaborate show in hopes of gaining the upper hand on their competition, and an unlikely castaway holds all the power at a game-changing Tribal Council, on SURVIVOR: SOUTH PACIFIC, Wednesday, Nov. 2 (8:00-9:00 PM, ET/PT) on the CBS Television Network.

Tonight’s episode:  Savaii is hoping that they is going to be a merge today.  If all goes down as they want they think it will be the biggest and greatest move in Survivor history.  The other team members are not thrilled that Cochran let Ozzy save him they believe tahat Cochran should have been voted out and proved himself.  ughh Cochran is making me natious tonight, it is really time for him to go!

Ozzy arrives at Redemption Island and introduces himself to Christine.  He tells Christine that Cochran had the idol and that the ‘little weasel’  pulled out the idol at Tribal Council.  Ozzy put on a good act.  Ozzy admits the move is either the craziest thing he ever did or the boldest thing he has ever done.

Redemption Island duel:    Both tribes are at the duel to witness it.  Ozzy continues to put on the act that Cochran did it all to him.  Ozzy puts on a good act, he tells the two teams he revenge.  The Challenge – the competitors must use sticks and rope to make a long pole.  They will use the pole to get three keys and  the keys open a lock the first person who gets the keys and opens the door and gets through the door wins.  There is a difference to this challenge,  the winner comes back to the game.   Ozzy wins the challenge and goes back into the game.   After 19 difficult games Christine’s game as ended and she is going.  As fast as Ozzy was vote out of the game he is back in the game.

Jeff tells them to drop their buffs and the merge is on.  Ozzy is hoping Cochran their Double Agent can infiltrate the other team.  The teams get back to the camp to a feast.  Right away Coach decides to question Cochran and he tells Cochran that he does not believe that Ozzy was voted him out he believes it was a plan.  Coach tries to get Cochran on his side by sympathizing with him.   Cochran believes Coach is a very intelligent man.  Cochran is such a snake he is telling the other team everything that he is suppose to be gathering information.  They guarantee Cochran if he jumps ship that they will save him.

Cochran gives the immunity idol back to Ozzy because he feels it is the fair thing to do.

Cochran and Dawn went for tree mail and Dawn is talking about how she really does not like how people treated Cochran and she is upset about the fact that she did not stand up for him.  Cochran tells her that this is the first time they will be making their own decisions because it is an individual game now.

They get tree mail and they are going to the immunity challenge. There is no more immunity there is individual immunity.  Tonight two people will get immunity one man and one women.  The first women out of the challenge is Edna and the first man is Cochran.

The old Savaii is happy because they have swung the votes the other way now since two of their old team won immunity.  Coach is still trying to convince Cochran to defect to their side.  Cochran is actually thinking of it.  Dawn tries to convince him that it is not a good idea.  She tells him the only reason Coach is talking to him is because his old team lost the immunity.

It is a tie they have to re-vote!

The next vote sees KEITH VOTED OUT!