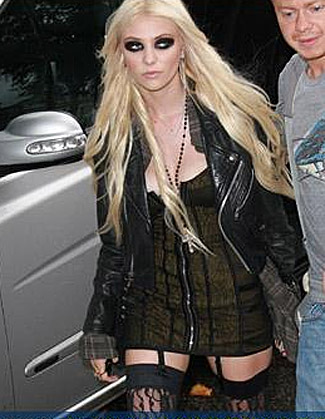 Gossip Girl and The Pretty Reckless lead singer Taylor Momsen, 17, sat down with Grazia Magazine for an interview.   Taylor told the magazine that she went to a super strict Catholic school where they taught her sex was bad and she had to learn sex was natural.  She also goes on about how maybe she is a bad influence on children.  Really – who knew?  Could it be her frequently pulling up her top so the world can see her breasts or maybe the inappropriate clothes she wears or maybe statements she makes like “My best friend’s my vibrator” maybe that make her a bad influence?

Below are some highlights of the interview:

I don’t understand why it makes people uncomfortable. Sex is a part of life, it shouldn’t be so scandalous.. My style’s not for everyone, I’m an extremist. But my mom loves fashion, so she gets it. My dad is the one who introduced me to rock ‘n’ roll, playing me The Beatles and The Who. They know that sex and rock ‘n’ roll go together, you can’t have one without the other.’

‘I probably am a bad influence.. The other day, this reporter brought his 12-year-old daughter to an interview. She was looking at me open-mouthed, like: ‘I want stripper shoes,    Daddy!’ He hated me! But I’m not saying, ‘Be like me.’ I hope girls read what I say in interviews, they should just be themselves. They wouldn’t want to be like me. I’m crazy. I’m f**king out of my mind. I’ve been told I was out of my mind since I was 11.”

I wonder if little Cindy Lou is as crazy as she says or is this just a big publicity stunt – I feel she is trying just a little too hard to be a rebel.  What do think?