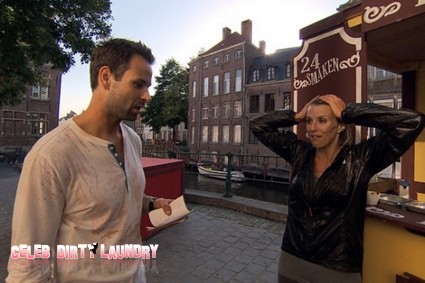 Tonight is an all new episode of the CBS hit show The Amazing Race.   The show returns tonight with its eleventh episode and it is called “We Are Charlie Chaplin.”  Stay tuned our sister site Fit Fab Celeb covers the show with up-to-the-minute details.  The four remaining teams depart from the Atomium in Brussels, Belgium on the penultimate leg of the race, with the knowledge that only three will be left standing at the end of this leg.   The teams still competing in the race are: Ernie and Cindy, Andy and Tommy, Amani and Marcus, Jeremy and Sandy.

“We are Charlie Chaplin” Episode Synopsis: The final four teams make their way to Panama City, where they come face-to-face with their fears as they take in astonishing views of the city skyline, on THE AMAZING RACE, Sunday, Dec. 4 (8:00-9:00 PM, ET/PT) on the CBS Television Network. Phil Keoghan is the host.

After this week we will be down to the final three and the remaining contestants will be competing on the grand final of The Amazing Race 19, which will air next week.

Tonight our sister site Fit Fab Celeb will be covering the show at 8PM EST so make sure head over to there and catch at all the results.    Refresh often to get up-to-the-minute results!