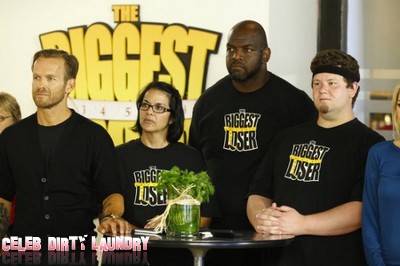 The Biggest Loser is back tonight with the eighth episode of the 12th season and we will be live blogging it for your enjoyment.  Last week saw the contestants shaken up when many of them got switched to new trainers.  Although they complained bitterly, the end result was with the new trainers the contestants were able to lose a significant amount of weight. The person voted last week was Jessica and she will not be the Biggest Loser.  Ramon who is dating Jessica was not happy that she was voted out and I am sure he is going to let his feelings be know to the other contestants this week.  If you missed last week’s episode you can read our official recap here!

Official episode synopsis: This week, only one contestant’s weight will count for each team, and trainers Bob Harper, Anna Kournikova and Dolvett Quince get to choose which player will represent their teams. The competition heats up with a cooking challenge in which players and their trainers have to race against the clock to prepare a healthy and delicious low-calorie dish for two special judges – season 11 “Biggest Loser” winner Olivia Ward and “Biggest Loser” cookbook author Devin Alexander. Prizes for the winning team include something very special from home. Dr. Huizenga drops by with a special medical guest to visit with the players and give one contestant some very welcome news. And later, the weigh-in reveals whether each trainer chose the right person to represent their team before an elimination leaves one player feeling very betrayed. Alison Sweeney hosts the series.

Tonight’s episode:  Ramon is upset about Jessica being eliminated, he describes it as a nightmare.  He is really upset that his team voted Jessica off pisses him off.  Joe keeps making comments and is trying to make excuses about why he voted Jessica off but Ramon is unwilling to talk to him.   The rest of the team realizes it is going to be tough to mend the fence with Ramon.  It is dawning on Ramon that everyone is out for themselves and he is now ready to play the game.

Bob is concerned that Vinnie is not bringing in the numbers that he should.  All the trainers are trying to figure out who will be the best person to choose to represent the teams during the weigh-in.  The trainers think that it will be a tough call and they are not looking forward making the decision.  One things for sure it is going to be an interesting week.

Bonnie dodged a huge bullet and Dolvett is pushing her.  The biggest number she has brought in is seven pounds and Dolvett expects her to do better this week and he intends to push her.  Bonnie agrees and she wants to show the rest of the team members that at 63 she is not dead.

Bob did not know much about Becky so he decided to take her aside and speak to her and get to know her and to get to know why she let herself get so big.

It is a new day and it is time for a challenge.  The teams are going to whip up a dish from the ingredients on the table in front of them.  The teams and their trainer has 30 minutes to make the dish and to present it to the judges. The winning team gets three prizes: they will get to sit down and catch up with the former Biggest Loser winner Oliva; their recipe will be included in Devin Alexander’s new cookbook and they will have a one pound challenge.  The judges for the challenge are last seasons Biggest Loser Olivia and Devin Alexander,  the author of every single Biggest Loser Cookbook.

Olivia, last years biggest loser is joining the black team for lunch and give them tips on how she won and how she kept the weight off.  They want to know what happens once it is all over and they are taken out of the Biggest Loser bubble.  Oliva tells the black team members that she contacted their families and had them make/send something for them.  Olivia tells them there is nothing like being encouraged by their families.

Anna speaks to Ramon about Jessica leaving.  He is upset because they said that they voted her out because she was too much competition.  He cannot get over the fact that his own teammates voted her out.  He tells Anna he has to forget about it and focus on getting in shape.

John (who is representing the red team) loses 10 lbs

The Blue Team loses the weight in and the person with the highest weight loss Ramon cannot be voted out.  Either Sunny or Joe will go home tonight.

Joe is voted out and he is not the Biggest Loser and it is time for him to say Goodbye!