The Divorce Gets Nasty: Kim Kardashian’s Revenge With Reggie Bush 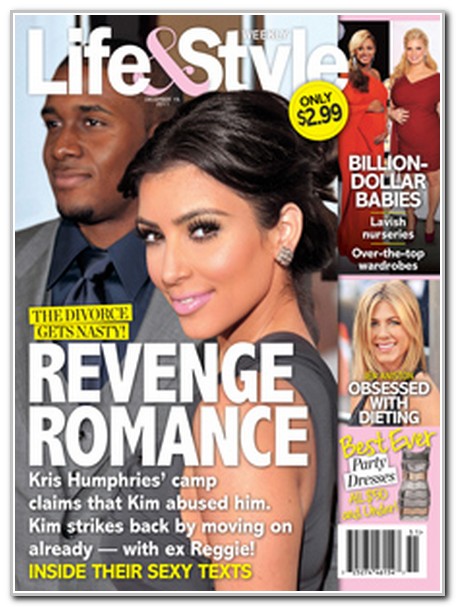 The current issue of Life & Style Magazine features the cover story ‘The Divorce Gets Nasty – Revenge Romance.’  The magazine claims that Kim Kardashian is striking back at Kris Humphries with a revenge romance with her ex boyfriend Reggie Bush.  Furthermore, they claim to have their sexy text messages. Celeb Dirty Laundry previously reported that Kim is desperate to get back with Reggie.

Kim began dating Reggie after being introduced by Matt Leinart at the 2007 ESPY Awards.   The had an on again, off again relationship.  They split on July 27, 2009 and got back together on September 28, 2009.   They split again in late March 2010.   Reggie has put some conditions on getting back with Miss KarTrashian, he insists that he never be part of her reality show.  Good for him!  What do you think is Kim trying to get Reggie back?  Is Reggie stupid enough to fall for it?  Sound out in the comments below!

Meanwhile the magazine also claims that Kris’ camp is saying that Kim abused him.  Of course she did, she took advantage of him and that is why Kris is filing for an annulment.  He is also trying to get the prenup he signed made null and void.  I don’t think the dirt is over yet….  Kim better hold on to her seat because the madder Kris gets the more details Kris is going to spill!

Also included in this weeks magazine they have all the details on the billion dollar babies and their lavish nurseries and over the top wardrobes.  If you must find out all this and more, pick up the current issue of Life & Style!