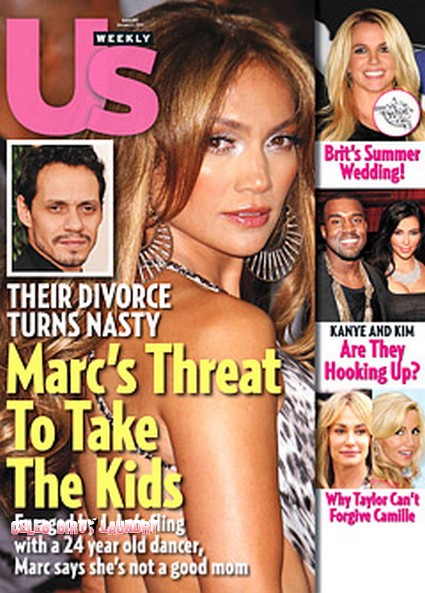 The current issue of Us Weekly features the cover story ‘Their Divorce Turns Nasty,  Marc’s Threat To Take The Children.’  The magazine claims to have all the details on how the Jennifer Lopez and Marc Anthony divorce has turned really nasty.  In the beginning it appeared the divorce would be amicable but after Marc saw Jennifer with her recent toyboy Casper Smart, 24,  all bets are off.  Apparently Casper is already getting along well with Jennifer & Marc’s twins three year old Max and Emme.

Us Weekly has more: “When the Latin crooner spotted photos of Lopez and Smart bonding with his son and daughter during a Thanksgiving vacation in Kauai, Hawaii, he “hit the roof,” one source says. “It caused a huge blowup.”  Anthony’s next move: Although he and Lopez, 42, already hammered out custody arrangements for the twins — ceding primary custody to the singer and American Idol judge — a close source tells Us  he’s “going back on his word and saying his wants joint custody.”

Add to all this Marc found out that Casper has been arrested for drag racing and speeding so he does not want Casper driving around with his children.  Marc just does not think Jennifer has good judgement.  Marc is so upset about Jennifer dating Casper the magazine claims he is saying she is not a good Mom.

Also included in this week’s issue the magazine claims to have all the details on Kim Kardashian and Kayne West and if they are hooking up.  If you ask me the two deserve each other LOL.

To find out all this and more, pick up the current issue of Us Weekly!