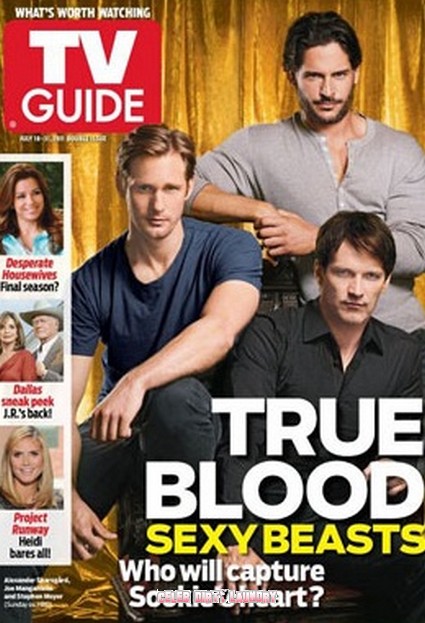 My favorite three men of True Blood, Stephen Moyer (Bill Compton), Alexander Skarsgard (Eric Northman) and Joe Manganiello (Alcide Herveaux) cover TV Guide Magazine.  Sadly they all have their clothes on :-)  During their photoshoot according to the magazine the men were not shy to strip down and it was hard not to stare.   As Alan Bell said: “They’re all insanely beautiful.”

Take Stephen Moyer’s Civil War-era vampire Bill Compton. He had to accept that it’s over with the love of his very long life, Sookie Stackhouse (played by Moyer’s real-life wife, Anna Paquin), and focus on his new role as vampire king of Louisiana.

Meanwhile, Alexander Skarsgård’s commanding Viking bloodsucker and cool bar owner Eric Northman is under a witch’s spell that’s stripped him of any memory of his badass personality, leaving him vulnerable and dependent on Sookie for protection.

Finally, Joe Manganiello’s working-class hero werewolf Alcide Herveaux is settled down with the woman who last year tried to kill Sookie — while he was serving as her bodyguard.

For more of their interview, check out TV Guide