BY Shannon Rose on May 9, 2011 | Comments: Leave Comments
Related : The Sheik, Wrestling 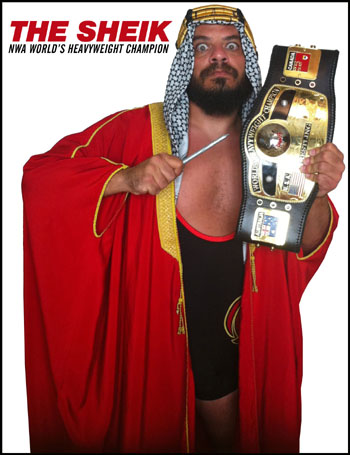 Before a madhouse crowd in Jacksonville, Florida on April 23, National Wrestling Alliance (NWA) Superstar The Sheik FINALLY got his much-awaited bid at the NWA World’s Heavyweight Title—and he won it in high drama.

The Sheik, who’s been getting screwed out of tries for the World’s Heavyweight belt thanks to the powers-that-be for years, got sweet vindication by beating Colt Cabana, although not without some controversy!

The referee was temporarily knocked unconscious thanks to an errant elbow and was out when Cabana pinned The Sheik. As fans howled, the ref woke up in time to see The Sheik putting Cabana into submission!

It was poetic justice for The Sheik, who couldn’t be denied on this evening, after years of frustration and disappointment.

Afterward, The Sheik told Hollywood reporter Shannon Rose that he plans on taking the “10 pounds of gold”, aka the NWA World’s Heavyweight Championship Belt, to Japan and defend it for the first time in 9 years in Japan, and The Sheik mocked those who tried to deny him his glory.

Listen to The Sheik’s post victory interview and more