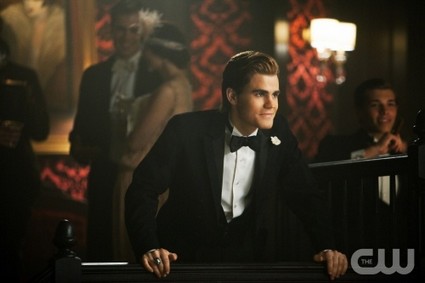 Tonight is the third episode of The Vampire Diaries.  The episode tonight is called “The End of the Affair.”   Last week on The Vampire Diaries Klaus put a plan in motion that would have given him even more power, but even with the unwilling participation of werewolf Ray Sutton,  things don’t go exactly as Klaus had planned. Damon and Alaric reluctantly went along with Elena’s new strategy to find Stefan, unfortunately it led Damon into a dangerous fight.  Caroline is still tied up and things are not going well for her.  If you missed last week’s episode read our official recap here!

This week’s official recap: Tonight’s show opens with Damon getting a call and it is Katherine and she is home sick.   She wants to know what she missed.  Damon figures out from the call that Katherine has been tracking Katherine and Klaus too.  Damon tries to find out what she knows.

Over to Elena she is in bed wakes up and Damon is there, she yells.  Damon tells her ‘you know you were dreaming of me’ LOL  Damon tells Elena that Stefan is in Chicago and to pack a suitcase.  They are going to Chicago!

Over to Caroline who is chained to a chair and she is calling ‘Daddy are you there?  Why won’t you talk to me’  Her father walks in and tells her he is sorry it is happening to her.  He wants to know how she is walking in the sunlight?  Caroline asks if that is all he wants to know and she shows him her ring.  He takes the ring from her.  The place where he has her has vervain in the air-system and a hole where sunlight comes in.  He tells her blood controls her.  He tells her he is going to fix her,  opens the hole in the ceiling sunlight pours in and Caroline starts to burn.  Ughh her father is torturing her.

Over with Damon and Elena they are in the car traveling to Chicago and Damon gives Elena Stefan’s diary which is filled with Stefan’s experiences in the 20’s in Chicago.  The show goes to a flashback of Stefan and a new character a blond women he meets in the 1920’s. ( She is suppose to be important to his past life)

Caroline‘s mom is leaving her a message while poor Caroline is still getting burned by her father.  He is trying to condition her to be repulsed by human blood.  With a father like Caroline’s who needs enemies!

Elena and Damon have arrived in Chicago and they are going to where Stefan lived in Chicago.  Stefan is not there, Damon finds a trap door in the place and behind the door are a list of names (his victims)  Elena asks what Damon was doing at the same time.   He tells her Stefan was a ripper, he was not.

Stefan is upset he wants to know why he does not remember Klaus and Klaus does not want to tell him why.  Klaus finally relents and tells Stefan that they did not get off to a brilliant start in the 20s and Klaus actually hated him.  He reveals the blond women from the 1920’s is actually Klaus’ sister Rebecca.  Klaus tells him if he can’t handle it don’t ask.  Klaus walks into a room and there is a coffin and his sister is there (Remember Klaus killed his whole family).  Rebecca was stabbed by a knife with white ash.  Klaus takes the knife out and we find out his sister is Rebecca the girl who the witch Gloria needs.  By talking out the knife, Klaus brings his sister back alive. (Remember A knife dipped in white ash kills an original but taking it out brings them back alive)

Stefan wants to know what is going on.  Klaus tells him he has many talents and he has learned from him.  Flashback to the 20’s and Klaus is asking him why he deserves an original (his sister)  A man walks up and is upset and asks him where his wife is.  Stefan calls the man’s wife and tells them to sit down at their seat.  Stefan cuts the women’s wrist and drains it into a champagne glass and makes her husband drink it.  Klaus is laughing, they make the man finish the glass of blood.

Back to current time, Klaus tells Stefan they are going back to his apartment.  Meanwhile he tells a security guard to stay with Rebecca and let her feed off him until she wants and make sure she goes to Gloria’s bar. (powerful witch)

Meanwhile Damon walks into Gloria’s bar and asks where Klaus and Stefan is.  Gloria won’t tell Damon.  Over with Elena she is reading Stefan’s diary.  She hears Klaus and Stefan outside.  They walk in and Klaus asks Stefan if he feels anything.   Stefan cannot figure out why Klaus wants him there and then we see he wants to go behind the trap door where Elena is hiding and see all the names of the people who Stefan killed.  Stefan opens the door and sees Elena and says nothing.  Klaus cannot see her.  He pulls something out of the wall.  He says to Klaus “see what I found” and he hands Klaus a bottle of single malt 1918.  Klaus turns and leaves and says ‘Let’s find someone to party with.’  They both leave!

Elena is still hiding behind the door and someone else comes it is Damon.  He gives Elena clothes and tells her to get dressed because he knows where Klaus and Stefan are going to be that night.

Over to Caroline who is burnt and her father is still there.  She is trying to assure her father she is okay and she does not need to be fixed.   She asks her father to stop, he says he has to fix her so he does not have to kill her.  The sun has gone down he tells her they will try again tomorrow and leaves and locks the door.  He walks out and his wife, Caroline’s mother Liz is there and she has a gun.  Tyler is with Liz and Liz is getting him to go and release Caroline.  Tyler lifts Caroline up and takes her out.  She is finally rescued.

Flashback with Stefan and Klaus (Nick in the flashback)  there is a raid in the speakeasy where they are and the police come in shooting.   Stefan finds out they are using wooden bullets.  Klaus grabs Rebecca and takes her, Stefan runs after him and then Klaus compels him to forget about Klaus and his sister.  Back to the present Klaus tells Stefan it was time to move on.  Stefan tells Klaus that it seems he is running from someone.  He looks up and sees Damon secretly signals Stefan to come.  Stefan leaves and asks Damon what the hell is wrong with him.  Stefan tells Damon he has to take Elena away that she is the reason that Klaus cannot make hybrids.  That Klaus cannot find out that Elena is alive.

Damon comes in the bar and leaves Stefan stays with Elena.  Damon sits next to Klaus and Klaus says to Damon ‘I see they let the riffraff in’ to which Damon replies: ‘Honey I have seen worse’  Love Damon!!  Klaus comments that Damon won’t stop and Damon says give me my brother back .  Klaus puts his hands around Damon’s neck.

Over with Elena and Stefan she asks Stefan come home.  As she hugs him she goes to stab Stefan with Vervain and he catches her.  Meanwhile Damon is being stabbed by Klaus and Gloria stops him from staking him.  Klaus tells Damon that when he is done with Stefan he won’t want to come back

Damon and Elena are in the car and Elena is really upset.  Damon asks if she is okay and she tells Damon just to drive!

Over with Caroline and Liz and Liz is trying to convince Caroline that her father is not that bad.  Good luck with that one!  Tyler walks in.   Caroline thanks her Mom for believing in her.  Tyler asks her if it would be a bad time to give her crap about sneaking out on her.  He gets into bed and hugs her and she sobs and tells Tyler, her Dad hates her.

Over with Klaus and Stefan they are looking for Rebecca and Klaus says ‘Rebecca come out, come out wherever you are’  All of a sudden Rebecca runs out of the shadow and stabs Klaus with the dagger and white ash.  Yikes!

Flashback to the past Rebecca is asking Klaus (Nick) where Stefan is. Klaus tells her she has to choose, she says Stefan.  He stabs her and kills her.

Back to the present Klaus pulls the dagger out and tells Rebecca she knew she could not kill him.  Klaus tells Rebecca he has a peace offering and he tells Stefan to come in.  He compels Stefan to remember the past and Stefan remembers Rebecca and his past.  He tells Klaus he remembers him and they are friends.  Klaus tells Rebecca he knows she has the ability to contact the original witch.  Rebecca goes for her necklace and it is gone.  Klaus freaks because Rebecca does not have the necklace she needs to contact the original witch.

Over with Damon and he is on the phone with Katherine and he tells her she was right Stefan was where she said.  He asks here where she is and she refuses to tell.  Another flashback and we see that Katherine was back in the 20’s too and we also see Stefan picking up Rebecca’s necklace.  Katherine is watching!    The police walk in and show Stefan a picture of Klaus and Rebecca and ask him if he ever saw them and he replies NO. (Remember Klaus compelled him in the 20s to forget all)

The show ends with Katherine getting in a taxi!