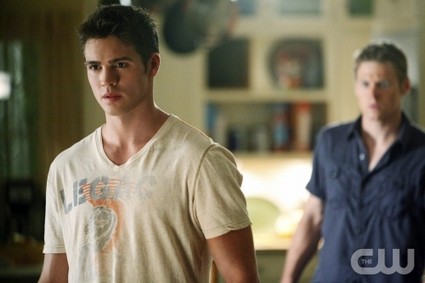 Tonight is the second episode of Season 3 of the Vampire Diaries.  The episode tonight is called ‘The Hybrid’.  Last week on the Vampire Diaries Elena found out that Stefan was alive and that he was building up quite an impressive body count of victims, but Elena being Elena is not giving up on Stefan.   At the end of last week’s episode Caroline got shot by Tyler’s Mom.  I cannot wait to see what happens to her, will she die?  If you missed last week’s episode you can catch our RECAP HERE!

Tonight’s show starts with Damon watching television where they are announcing that his fake girlfriend Andie Starr was dead.  Elena shows up to tell Damon that Stefan called her the night before.  Elena had the call traced and it came from Tennessee.  Damon tells Elena that Stefan is gone and she replies if he was gone he would not have called her.

Over with Alaric someone is knocking a the door and it is Elena and she wants him to tell her what he knows about Stefan and Tennessee.  Alaric tells her it is not safe to be around Stefan because he is off the rails.  She tells Alaric she will not give up on Stefan.

Over with Klaus and Stefan, Stefan is carry Ray (The Werewolf) and they are heading the werewolf pack that Ray lead them to.  They walk right into the middle  of the pack and the werewolfs ask Klaus and Stefan who they are.  Klaus tells them who he is and they they respond “you are the Hybrid”  Klaus says “Good you know who I am”.

Over to Tyler and his Mom’s house, she tells Tyler if he brings a girl home don’t have her sneak out like a prostitute.  He tells her Caroline is not a prostitute.  His mother thought he might be a vampire and put vervain in his coffee, obviously it had no effect.

Over with Jeremy and Matt, he is telling Matt he saw ghosts again last night, he saw Matt’s sister Vicky.  Matt does not want to know about it but Jeremy tells Matt that Vicky said “Help Me”  and he wants Matt to help him find out what Vicky needs.

Over with Tyler and Elena he is telling her that most werewolf’s chain themselves during a full moon.  He tells her some werewolfs go somewhere they can change and have fun.  Elena asks if there is a place in Tennesse and he says yes and gives her a map to a place.  Elena asks Alaric to go with her to find the werewolves.  She tells him if he does not go with her she will go alone.

Over with  Klaus and the werewolf pack, Ray is going through the transition and he needs human blood to complete it or he is going to die.  Klaus finds one person who is human with the werewolf’s and bites him and gives him to Ray so he can complete his transition.  Klaus is trying to make an army of hybrids.  He tells the werewolf’s they are either with him or dead!

Over with Matt he asks Tyler if he is moving in and he tells him he is waiting for Caroline and wants to know if he has seen her (Tyler does not know his Mom has her)  Matt offers to help Tyler at the full moon.

Over at Mrs. Lockwood house (Tyler’s Mom) Bill shows up, she wants advice on what to do with Caroline.  He tells her she is a vampire and they have to do what they have to do.

Alaric and Elena are hiking to the werewolf pack,  Alaric is fully ready for the werewolfs and he gives Elena wolf-bane bombs.  Elena wants to give Alaric John Gilbert’s ring.  He finally accepts it (remember the ring will protect him from being killed)   All of a sudden Elena goes flying in the water.   Elena looks up and it is Damon he has pushed her.  Alaric tells Elena, Damon has to help them.

Over with Klaus and Stefan, Ray is almost through his transition.  Klaus tells Stefan he is building an army of comrades.  He tells him he wants the army to be so big no one will mess with them.  Stefan asks why he is keeping him around and Klaus tells him he will find out when he wants him to.  All of a sudden Ray is having problems with the transition.    It looks like Ray may have been pretending because he gets up and runs, Stefan runs after him and Ray bites him, Ray gets away.

Over with Elena she is mad at Damon she feels he has given up on Stefan.   He does not want her to go to the werewolf camp because Klaus thinks she is dead and she is safe because of that.  If Klaus finds out she is alive it won’t be good.

Stefan spots Damon, Klaus and Elena coming and tries to get Klaus to leave.   He asks Klaus to give him his blood because he has been bitten by Ray (werewolf bites are fatal to vampires) and Klaus tells him he will give it to him when he catches Ray.

Back over at Tyler’s house he is giving his mother (Mrs. Lockwood) hell because she put vervain in his coffee.  He wants to know why she was testing him.  She tells him he has been spending time with Caroline and she had to be sure.  He wants to know if she did something to her.  She tells him he can’t be with her because she is a monster.  He tells her she does not know about him.

Back over with Damon, Alaric and Elena, Damon is getting worried because the sun is about to set.  Ray walks up to them and he is bleeding all over, he attacks Damon and Elena throws a wolf-bane bomb and Ray falls off.  They realize he is a hybrid.

Over with Matt and Jeremy they are getting personal items of Vicky, Jeremy wants to try to contact her and Matt is really upset.  Matt tells Jeremy he just cannot do it and asks Jeremy to leave.

Over with Elena, Alaric and Damon they tie Ray up to a tree and they know it is not enough to hold him.  Ray starts to turn, he is not suppose to be turning until it gets dark  Elena is pulling Damon they have to get out of the mountains because with Ray turning to a werewolf he could bite Damon and that would kill him.

Over with Damon, Elena and Alaric Elena falls and a wolf faces her.  Damon tells her not to move and he makes the wolf run after him.  Alaric makes Elena run and they leave Damon and hope he will be okay

Over with Damon, Ray jumps him (now a hybrid) and they are fighting each other, Stefan shows up and saves Damon.  He tells Damon that he told him not too follow.  Damon tells him if he does not want them to follow Stefan has to stop calling Elena.  Stefan tells Damon to go home and try to keep Elena there.

Over with Tyler and his Mom he takes her to the caves and he tells her she thinks Caroline is evil wait till he sees her.  He starts to chain himself and locks her up so she will be safe when he transitions into a werewolf.

Back over with Elena and Alaric she is upset because they left Damon.   She tells Alaric he is not a lost cause he is just lost.  She tells him they are all lost.   He tells Elena he is keeping the ring she gave him.  Damon shows up at the car.  Elena comes out of the car and Damon tells her get back in.  Stefen is watching them from afar.

Matt shows up at Jeremy’s house and apologizes, he brings beer.  He tells Jeremy he spent the day going through Vicky’s stuff.  Matt takes out some of her stuff, he tells Matt that he does not remember Vicky dying, that the memory was taken away from him.  The ghost of Vicky shows up Jeremy sees it but Matt does not.   Jeremy asks Vicky how she needs help and Vicky tells him she can come back.  Next is another one of Jeremy’s vampire girlfriends and she tells Jeremy not to trust Vicky.

Over at Elena’s she gets out of the shower and Damon is there she asks if he is drunk.  He tells Elena he though Stefan is gone but he is not.  He tells Elena, Stefan can be saved.  She asks why he changed his mind.  He tells her because even in Stefan’s darkest hour he cannot let him die.

Damon says he has to know why she would not stay on the mountain, what changed her mind and made her leave because she was hell bent to stay.  Elena admits she was worried about Damon and that she worries about him.

He tells her when he brings Stefan back he wants her to remember what she felt for him when Stefan was gone.

Over with Tyler he wakes up naked and is Mom is there looking upset.  She tells Tyler she will take care of it and make sure nothing happens to Caroline.  Caroline calls Bill and tells him she made a mistake.  Bill tells her Caroline is not human.

Over with Caroline she is tied up and frightened and calling for Mrs. Lockwood.  She hears someone and thinks it is Mrs. Lockwood but it is Bill her father to kill her.

OMG what is going to happen to Caroline, will her father kill her?  Will Klaus figure out that Elena is alive?  Is Elena the reason Klaus cannot create a hybrid?  Sound out in the comments below and let us know what you thought of the show!!