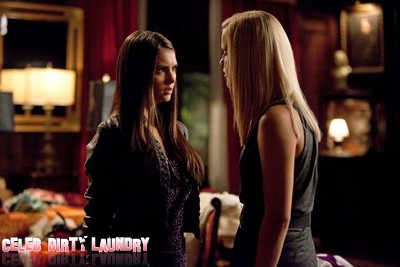 A preview for The Vampire Diaries episode 7 has been released and it is called “Ordinary People.”  We have a sneak peek of the episode and several pics from the episode for your enjoyment.  On tonight’s episode the town was invaded by spirits of the dead.  Some were trying to help and some were trying to get revenge.  Lexie came back to help Elena with Stefan, Mason Lockwood came back to help Tyler and Miss Sheila came back to help Bonnie close the spirit world door.  Alaric and Damon found a long lost clue.  If you missed tonight’s episode read our official recap here!

Official synopsis: THE ORIGINAL FAMILY — With help from Elena (Nina Dobrev) and Bonnie (Kat Graham), Alaric (Matt Davis) tries to decipher the meaning behind his recent discovery Elena (Nina Dobrev) and Rebekah (guest star Claire Holt) engage in a mean-girl power struggle, until Rebekah finally reveals some of her family’s ancient secrets and the violent past she shares with Klaus (Joseph Morgan) and Elijah (Daniel Gillies).  Damon (Ian Somerhalder) tries a reckless new approach to make a breakthrough with Stefan (Paul Wesley), and they’re both surprised by an unlikely ally.  J. Miller Tobin directed the episode with teleplay by Caroline Dries & Julie Plec and story by Nick Wauters (#308).

In the promo Alaric and Damon show Elena the names carved into the cave wall.  The names are the ‘Original Families’ and they realize the images tell a story but they have to find out what they mean.  Across the video flashes ‘Some family secret, should stay hidden’  Looks like another exciting episode.  Are you enjoying this season as much as I am?

The episode airs on the CW on November 3rd, 2011.  Check out the preview video & the pictures below and let us know in the comments below what you think!