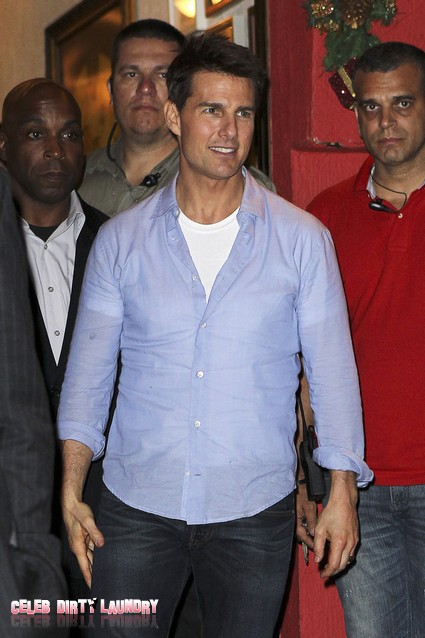 The M:I flicks are known for their elaborate stunts and heart pounding adrenaline. As a movie go-er you may be inclined to think that the main character’s stunts are done by a team of look a like stunt men and women and a whole lot of work in post production. Well, in the case of Tom Cruise, you would be wrong.

In a behind-the-scenes video on YouTube, Cruise can be seen doing his own stunts approximately 1.5 miles above the earth. While my palms were sweating just watching the video, Tom seemed perfectly at home hanging sideways, leaping head first out of windows, running vertically down the side of the building and doing his best Spiderman up the outside façade – like it ain’t no thing. (See for yourself, below)

The building in question is the Burj Khalifa in Dubai, the tallest building in the world. The YouTube behind the scenes clip is narrated by Ghost Protocol director, Brad Bird who jokingly takes it all in stride saying, “This is just another day of work on Mission Impossible.”

M:I Ghost Protocol debuted on only 425 screens (mostly IMAX) on December 16 and despite limited showings, has already earned $13 million. According to Boxoffice.com, Ghost Protocol took third place behind the latest Sherlock Holmes ($40million) and Alvin and the Chipmunks ($23.5 million) installments, both currently in wide release.

Ghost Protocol is the first Mission Impossible movie in five years and 49 year-old Cruise’s first movie since Knight and Day.

Even though his movie opened this weekend, Cruise took some time out to be a doting husband and celebrate his wife’s 33rd birthday in NYC complete with a trip to see the Radio City Rockettes. The couple was joined by Suri and Holmes’ parents. They are reportedly staying in the Upper West Side while their NYC apartment undergoes some work.