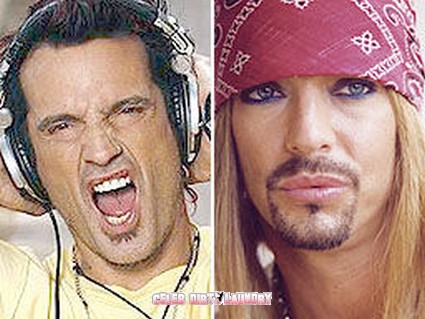 A trip to a police shooting range for Motley Crue drummer Tommy Lee and Poison singer Bret Michaels could result in a felony charge for one or both musicians, after a TV news channel showed photos of the visit to a sheriff and local police chiefs.

The pair took time out from their joint headline tour to visit a range in North Carolina earlier this month. They were accompanied to the shooting range by law enforcement officers from Rowan County Sheriff’s Office, and their visit is believed to have been arranged by a former policeman who now works with bands.

But Lee and Michaels could have broken state law if they have criminal records which prohibit them from using guns. North Carolina’s Felony Firearms Act says it is an offence “for any person who has been convicted of a felony to purchase, own, possess, or have in his custody, care, or control any firearm.”

In 1998 Lee was jailed for four months after pleading no contest to kicking Pamela Anderson.

The police probe was launched after a local TV station, WSOC, contacted authorities and informed them of the rockers’ trip to the shooting range.

A representative for the station says, “The sheriff and local police chiefs didn’t know about it until we brought it to their attention. It could be illegal if any of those men have criminal records that prohibits them from using guns.”