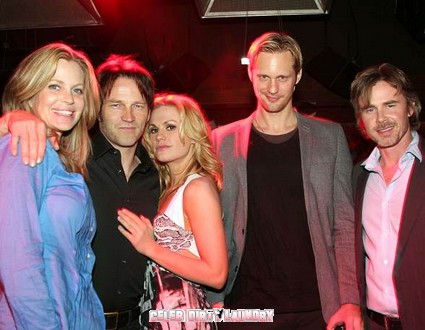 The boss of True Blood, Alan Ball, released some secrets on what’s slated for the much anticipated season 4. It seems that winning the heart of fair Sookie will be an important part of the season and fairies, witches, and panthers all play big roles.   Season 3 ended with Sookie breaking up with Bill and seeking refuge with her sister fairies.

But it turns out that Fairyland is not all yellow lighting, pixie dust, and sparkly wings. ”She’ll learn a lot about what it means to be an actual fairy.”

Meanwhile Alcide Herveaux the hottest werewolf on the planet (if you missed some new pics of him catch them HERE)  In this seasons The werewolf heads ?to another city and ?runs into a new pack of creatures. As to Alcide and Snookie, Alan Said: ”I would definitely say that he would be more than happy to pursue Sookie if the circumstances were right, which they are not at this point.”

Everyone’s favorite vampire Eric Norman is a mean ol’ cuss when he encounters ?the witches congregating in Louisiana, but a series of scary events results in the vampire losing his memory — and edge. ”It’s been fun to play because there’s a sadness there ?as well,” says Skarsgård. ”He’s very vulnerable ?and innocent.”

Let’s just hope that the show is as good as last season – its never easy to stay on top!  To read some more teases on other True Blood character head over HERE. True Blood returns tonight on HBO at 9PM.  Check out the first 3 minutes of Season 4 preview below!