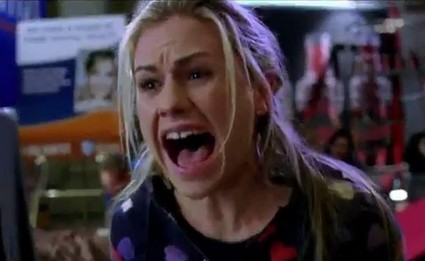 On last night’s episode of True Blood, Bill and Nan spoke out at an event in the name of tolerance.  Unfortunately Marnie/Antonia made sure to mess that up.   The show ended with the people at the event running for their lives and another battle.  Antonia plot against the vampires seems to have worked.  One of what I thought was the best moments of last night episode was  Jessica is unloading her problems to Nan.   Nan tells Jessica that the last hours she has spent with her has convinced her she does not want to be a maker.  If you missed last night’s show catch our RECAP HERE!

Below is the preview for next week’s episode 10 called “Burning Down the House” – Warning Spoiler Alert!  – “As all hell breaks loose in Shreveport, Sookie summons her most potent powers yet to save Bill, in the process breaking a spell and leading Marnie to re-evaluate her mission.  Jason urges Jessica to glamour him for Hoyt’s sake; Terry drags Andy to “Fort Bellefleur” for an intervention; Alcide reconsiders his allegiances after Marcus’ fight with Tommy.  Jesus, accompanied by Sookie, Lafayette and Jason, tries to breach the Moon Goddess Emporium’s defenses to liberate Tara and Holly, while Bill leads a brigade of vampires committed to blowing the place to kingdom come.”

In the preview Marnie/Antonio orders Eric to ‘Kill the King’   From the preview it appears that Sookie saves Bill’s life and later we see what I suspect might be Bills hands around Eric’s neck.  It also looks like Debby may be flirting with Marcus.  Would not surprise me one bit, the girl is not trust worthy.  Sadly there are only three episode left of the season.  So stop by next Sunday August 29th, 2011 to catch our preview of “Burning Down the House” and enjoy the preview below.  Let us know your thoughts?  Are you enjoying this season of True Blood as much as I am?