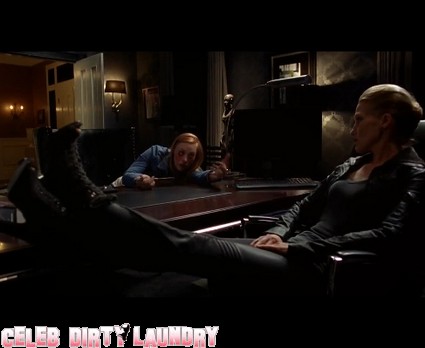 Prepare your fangs because it is that time again!  True Blood is on tonight on HBO and if you missed last week’s episode the show ended with a battle between the vampires and the witches and Alcide carrying a wounded Sookie off the battlefield with Debbie watching.  If you missed last week’s show be sure to catch our recap HERE.  Episode 9 of True Blood is called “Let’s Get Out Of Here”   Will Bill be able to save Sookie?  Well we will find out tonight :-)

This week’s show tonight opens with Alcide carrying Sookie away from the battlefield as he runs Bill intercepts him and grabs Sookie.  Bill brings her to the house and lays Sookie on the bed and tries to get her to drink his blood.  Bill tells Alcide they have to pray as she barely has a pulse.   Alcide asks Werewolf or Vampire who will he listen to?  Bill replies ‘I don’t know.’

We are back at the witches place and they are yelling at Marnie because she brought Eric back with them.  Marnie tells them he is under her control.  Tara is pissed at her because Bill handed them an olive branch.    Marnie/Antonia tries to get them to all hold hands and make a protection spell.  Marnie plots her next move against the vampires and tells the others not to leave.   They call her Marnie and she has a hissy fit.  She tells them she is not Marnie she is Antonia.  Tara and Holly have misgivings.

Meanwhile Sookie wakes up and she asks where Eric is.  Alcide thinks she is crazy because she wants to look for Eric.   She thanks Bill for the blood.

Over at Lunas, Luna is telling Sam to leave because Marcus is not his problem.  She tells him it will be worse for everyone if Marcus comes back and Sam is still there.   Sam asks Luna to take her daughter and they can all go camping.

Back at Alcide’s house Debby is pretending she is sleeping.  This is not going to be good she saw him leave with Sookie even though he promised Debbie he would stay away from her.   We get a look at Alcide’s bare butt – NICE….

Jessica is unloading her problems to Nan this is a great scene.  Nan tells Jessica that the last hours she has spent with her has convinced her she does not want to be a maker.  LOL

They are all in bed, silvered and Bill is tell Nan they may have to cancel tomorrow’s “Festival of Tolerance” event because Eric is missing.  Bill and Nan Flanagan clash over their respective agendas.  Nan tells him the festival is going forward and Bill better be in  tolerant and f*cking happy mood.

Over at Hoyt’s house it looks like he was drinking a lot the night before.  He sits on the couch and picks up a Taylor Swift CD.   Good plug for her.  He packs a box and on it is labelled ‘For you monster’   Hoyt gets a visit from Lafayette, only it’s not really Lafayette.

Over at Arlene’s house demon child Mikey is missing.     Jason and Andy are there and they are trying to figure out what happened with the baby.  The phone rings and Hoyt tells Jason that Lafayette has Mikey.  Andy heads out of the room and downs a vial of V, remember he is hooked on V.

Convalescing after her latest near-death trauma, Sookie envisions a world where there’s room for both Bill and Eric.    A great scene Eric and Bill fighting over which one loves Sookie more.   Sookie tells them to shut up it is her dream and she gets to direct it.

Tommy is in the bar and Marcus walks in (Werewolf pack leader) he is looking for Sam.   He asks Tommy where Sam is and Tommy tells him he has no idea where he is.  Marcus gives him something for Sam.  He tells Tommy if he does not show up he is going to have a bigger F*cking problem then he already has.

Justin, a pantless Andy and Hoyt show up at the house.  Andy all pumped up on V walks right up to the house.   He tells Lafayette to let him in.   Jason tells Andy that the rules are to diffuse.  Andy smashes the door down and Lafayette who is possessed by the weird ghost Mavis is not giving the demon kid up.  Terry shows up and Andy won’t let him go in.

Over with Luna and Sam camping.  ughh I could do without this.  They are really making Sam boring this season.    Same changes into a bunny to make Luna’s daughter happy.   ahhh too cute.  Next, move on…

Back over at Sookie’s house she has decided that she is in love with Bill and Eric.   She is proposing to them that the two of them be hers.   The boys are not pleased.  She asks them what is with them and morality they are vampires.   She tells them she loves them and she wants them to both love her back.  It is either both of them or nothing at all.  She strips down to her red bra and red panties and starts making out with both of them.  Fangs come out they both bite her and she wakes up from her dream.

Over to Debbie and she is buying V…  I mentioned I don’t think that the Debbie, Sookie, Alcide thing is going to go well.  Debbie is pissed.

Jesus shows up at the house to help with Lafayette.  Lafayette is possessed with ghost (Mavis)  Jesus tries to purge the restless spirit out of Lafayette.    He tells Mavis that his boyfriend is a medium and she has taken his body.   I have to say Lafayette is a fantastic actor he plays the role of Mavis perfectly.

Over at Sookie’s house bitch Debbie hyped up on V is there.  She has flowers for Sookie, Sookie is suspicious.   She is telling Sookie that Alcide is the first man she ever loved.  She tells Sookie she wants to help her, Sookie grabs her hand and reads her mind and sees she is telling the truth.   Sookie is telling Debbie that Alcide really loves her.

Over at the Moon Goddess Emporium Debbie is knocking on the door and Marnie answers the door.  Debbie tells Marnie/Antonia that Debbie is pledging the werewolves allegiance to their cause.  Meanwhile Sookie is breaking in.  Debbie is causing a distraction while Sookie searches for Eric.  Sookie finds Eric.  Sookie does not know that Eric is under Marnie’s spell.  Eric tells Sookie he has to kill the King, King Bill!  Debby tells  Marnie she brought Sookie to her.  Tara is holding a gun on Sookie.  Tara is telling Sookie (telepathically) to charge her and tells her Marnie’s plans.  Tara is telling Marnie/Antonia that she is sorry that Sookie charged her.   Sookie runs out to the care and Debby was about to leave.  Sookie is going to save Bill.

Marnie/Antonio tells Eric to come and sets a spell and locks all the women in.  Tara tries for the door and it burns her hand.  They are locked in.  They are getting more than they bargained with Marnie/Antonio.

At the  “Festival of Tolerance” Bill and Nan are on the stage.  There is a lot of security but Marnie/Antonia is on the way with Eric and Sookie is on her way to save the day!

Jason is over at Hoyt’s house helping him fix his door.  Jason tells Hoyt they witnessed a miracle tonight.  Jason picks up a CD (Taylor Swift) and asks Hoyt if it is his.  He Says, NO it goes in the monster box.  Hoyt asks Jason to make a delivery to Jessica of the monster box because he never wants to see Jessica again.

Tommy has changed himself into Sam and heads over the werewolf den to find Marcus.  (Remember he is a skin walker so can take Sam’s appearance)   Marcus tells him to stop screwing his wife.  Tommy/Sam says he has not slept with his wife but his brother has and she was sweet.  Marcus and the rest of the werewolves start to beat the crap out of Tommy/Sam.  Alcide gets upset and pulls them all off of Tommy.   Tommy changes back to himself and they realize it was Tommy and not Sam.  Alcide picks up Tommy and takes him out.

Marnie and Eric are at the ‘Festival of Tolerance’  Marnie is putting a spell on security so they can get past and I bet she has other plans for them.

Jason shows up at Jessica’s house.  He is so cute he has scratched the sign on the box that said ‘Monster box’  ahhhhh  They are so cute together.  Jason tell her if she ever needs to talk.  She invites him in and he says it is not a good idea.  My heart be still… he is adorable….  Oops his good intentions last for about 2 minutes and they naked and doing it..  Love them together much better than Jessica and Hoyt.   What do you think?   Are you loving Jason and Jessica together?

Meanwhile Sookie gets to the Festival of Tolerance just as they are introducing Bill.  Marnie and the other witches are watching in the wings.  Eric is there to.  Bill is making a speech.  All of a sudden Sookie starts screaming Bill and the human security guards are up in the air and the vampires that Marnie/Antonio put under a spell have killed the guards.  People at the festival are freaking out.  So much for the vampires public relationships idea!

Sadly, the show is over, let us know what you thought of the show in the comments below!  Do you buy the Debbie wanting to help Sookie?  I don’t!