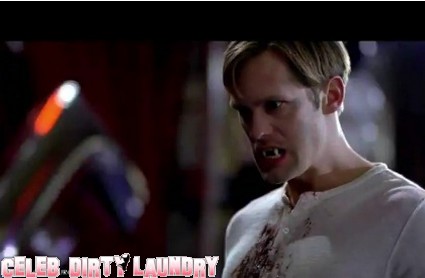 Fangs out True Blood fans tonight is a new episode of our favorite show.  On last week’s show all hell broke out at the Festival of Tolerance  Marnie has put a spell on the vampires guarding the event and they have killed people at the festival.   Marnie/Antonia has compelled/spelled Eric to kill Bill.  Sookie walks into the event and is set on saving Bill.  Will she be successful?  Will Eric kill Bill?   If you missed the episode catch our RECAP HERE!

Tonight’s show called “Burning Down The House” opens with the Festival of Tolerance and all Hell has broke lose.  Sookie is trying to get to Eric to stop him from hurting Bill.   She stands between both Eric and Bill and tells Eric to not let Antonio control him.  They won’t stop and all of a sudden she yells ‘No More’  lightening bolts come from her hands and all Marnie/Antonia’s spells are broken.  Marnie/Antonia looks shocked it seems the tides are about to turn!

Marnie/Antonia is looking down at the aftermath from what she set in motion and she says ‘What have I done.’    Marnie/Antonia disappears and Nan tells them they have to help the people who have been hurt.  Nan tells him image!  Eric appears to have his memory back.

Over with Jessica and Jason, she is telling Jason not to be upset Hoyt broke up with her.  Jason is upset because Hoyt is his brother.  He tells Jessica he has helped Hoyt for most of his life.   Jason tells Jessica he would never have slept with her if he had not drank her blood.  Jason urges Jessica to glamour him for Hoyt’s sake.  Jessica is upset because Jason wants to wipe her from his memory.  Jessica tells him she will not glamour him just to help his guilt.  Her parting shot ‘F*K humans, I am going to eat someone!’

Over with Alcide and Tommy, Tommy is really beaten up and he asks Alcide to take him to Merlotts.

Nan is pissed off with Bill because he never told her about Sookie’s powers.  Bill tells Nan this is her fault because she did not let Bill kill Antonia.  Bill tells Nan that they are going after Marnie/Antonia and they are taking her out by any mean they have to use.

Eric remembers all he tells Sookie he has not changed he is just more.  Sookie is upset she tells Eric when he was trying to kill Bill she just could not consider a world without Bill.  She tells Eric she loves both him and Bill.  She says maybe because they both gave her blood, she does not know why.  Eric tells her she is his.  Sookie tells him she never promised that.  Eric tells her he loves her.

Pam comes in and she is very happy because Eric is back.   Eric tells Pam Sookie was the one who broke the curse.  Pam thanks Sookie but she is confused that Eric did not summon her right away.

Bill tell Sookie he is going to lead a brigade of vampires to blowing the Moon goddess Emporium to kingdom come.  Sookie is upset because Tara is there and she tells Bill innocent people will die.  Bill tells her it is war!

Over with Alcide he bring a bleeding Tommy to Sam.  Sam wants to get Tommy some vampire blood to save him, but Tommy tells him NO.  Alcide tells Sam Tommy has the right to choose.  Tommy is dying, he apologizes to Sam for what he has done!  Tommy is dead and Sam says “Marcus is a dead wolf'”

Hoyt shows up at Jason’s place and Jason lets him in.  Hoyt tells Jason he does not want her back but he is waiting for her to come to the house.  Hoyt is really upset and Jason is trying to comfort him.  Jason goes over to Sookies, he cannot stand Hoyt anymore.  Sookie tells Jason she needs his help because Bill wants to blow up the Moon Goddess Emporium and Tara is in there.

Over at Terry and Arlene’s they are totally pissed off at Andy about his V.  He is lying to them and telling them it is not his.  Arlene is telling him off and tells him he cannot come near her babies until he gets straight.  Terry drags Andy to “Fort Bellefleur” for an intervention.

Holly is trying to find a spell to help them out.  Tara is frightened because she is afraid what they will conjure up.  Tara tells Holly she does not have faith in magic.  Holly thinks they can get magic on their side.

Antonia and Marnie separate and Antonia is upset about all the people who died at the festival.  She tells Marnie they are no better than their enemies.  She tells Marnie she did not come back to hurt the innocent.  Marnie tells Antonia they are not innocent they are collaborators.  Who knew Marnie is the big bad bitch after all.   She is trying to convince Antonia that that the people who are not vampires are not worth helping.  Marnie tells Antonia that fate brought them together to fight evil.  She goes back into Marnie’s body, Marnie has convinced her.

Nan, Jessica, Bill, Eric and Pam are silvered and Nan is telling Bill that she is going to make sure he is finished.  Nan is yelling at them all.  Jessica tells them all she does not care as long as she gets to killed someone.

Jesus, accompanied by Sookie, Lafayette and Jason, tries to breach the Moon Goddess Emporium’s defenses to liberate Tara and Holly.  Jesus is going to try to go in to save Marnie.  Seems like he does not know Marnie is actually the big bad and not really Antonia.  Jesus goes towards the Emporium and it gives him a huge shock.  Marnie/Antonia walks out of the house and Jesus tells her that she is his friend.  He tells her he was in Mexico because his grandfather was ill.  She tells him he has to come to her to prove he is her friend.  As he walks toward Marnie he is surrounded by an electrified force field.  He gets through it and Marnie tells him welcome back.

Over with Marcus and he is at Debby’s house.  He wants to know where Alcide is at, he tells Debby he has to have a discussion with him.  I see Debby and Marcus getting together.  Marcus is flirting up a storm with her.  Debby tells him she is just about ready to hook up with another wolf.

Sam shows up with Alcide at the wolf pack house.  Sam has a gun and he wants Marcus.

Jesus is trying to convince Marnie/Antonia to put down the protection spell but Marnie/Antonia is not falling for it.  Jesus asks Antonia if he can speak to Marnie his teacher.  Marnie comes back and tells Jesus she is magnificent.  Jesus tells her she has been possessed.  Marnie tells Jesus it is not against her will.  She tells Jesus, Antonio’s desires are hers.   She tells Jesus it is not possession it is a union.   He tells Sookie telepathically that Marnie has flipped sides and she is running this show.

Meanwhile Holly and Tara are chanting a spell and trying to break the protection spell.  It looks like perhaps they have been successful.  Marnie sees what is happening screams traitors and as they run out of the house, Sookie and Lafayette run to them.  Marnie puts a spell on them and they all disappear.

The vampires show up armed to the gills at the Moon Goddess Emporium and the show is over…….