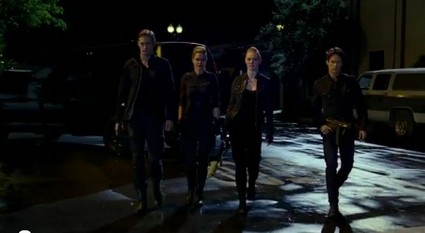 Only two more episodes of True Blood left.  In the most recent episode of True Blood we saw a continuation of the vampire/witch war.  We also learned that Marnie is a big bad bitchy witch and she is driving everything not Antonio.  We also saw Sookie let loose some fairy power that broke the spell that Marnie had over Eric.  Nan and Bill are not agreeing with Bill’s plan to kill Marnie/Antonio.  Bill is determined he is going to blow up  the Moon Goddess Emporium.  The show ends with Bill, Eric, Jessica and Pam in front of the Moon Goddess Emporium to blow it up.  Problem is Sookie is inside!  If you missed the show catch our RECAP HERE!

Spoiler Alert!  In the September 4th episode titled ‘Soul of Fire’,  As the Wiccan-vampire standoff reaches a critical juncture,  Sookie summons her faerie powers to prevent Marnie  from bewitching Bill, Eric and Pam into a suicide march, while Jesus casts a secret spell designed to un-bind Marnie/Antonia and break the witch’s deadly defenses. Sam settles a score with Marcus; Alcide confronts Debbie about her allegiances; Andy  finds unexpected passion in the forest; Lafayette is consumed by the past.

If you want peace, you must prepare for war.  The war is on and the war between the witches and the vampires has escalated to the point where both sides are out for blood.   The preview looks exciting and next week’s show should be amazing.  The preview video is below for your enjoyment.  Let us know what you think about it? I love the ending :-)

Sookie is telling Marnie/Antonia that Bill and Eric are outside and if they don’t get out they are all going to die.  Marnie/Antonio tells everyone in the Moon Goddess Emporium that the vampires have no regard for there lives.