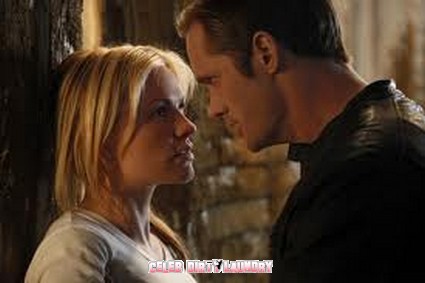 Last week for the season premiere True Blood fast forwarded it eighteen months ahead while Sookie was with the faeries.  If you missed last week’s show go read our RECAP here.   Tonight’s episode is called “You Smell Like Dinner” and the show will clear up some of the things that they left hanging in the premiere show.

The show starts with Jason Stackhouse and he is just coming too after being knocked out. (Last episode he was knocked over the head and dumped in a freezer)   Timbo is licking him because he has a cut on the head and he says please don’t lick me I am more of a band-aid kind of guy.  He sees he is tied up and he asks Megan and the boy why they have him tied up.  He says he has been good to them and asks them to unloosen him.  They start to loosen him and Phil walks in with a shotgun and starts screaming at Jason for being near his women Crystal.

Bill is talking to the one of the people who was at the witch coven that Lafayette was at.  She is telling him about the bird they brought alive.  It also seems that Bill is sleeping with her.

Now we are over at Fangtasia and there are people protesting outside the bar.  Since Russell had his speech on television last season when he told people that vampires wanted to eat them people are protesting vampires.  Hoyt gets into a fight with one of the protesters.  Best line of that scene “Technology is taking the fun out of being a vampire”

Meanwhile Bill having sex with the girl from the coven and he feels Sookie in the forest and 2 men with guns confronting her.  The men tell her no one visits King Bill.  Meanwhile Bill radios them and tells them to stand down and let her by.  Sookie goes into the house and Bill and coven lady (Caterina) are getting dressed.  Bill tells her Caterina is part of his security.  Sookie tells Bill she does not want to be Erics.  Bill tells her he is not sure what he can do but she should go live with another human.  Sookie asks him how he became King.  She tells him never mind if there is one thing she knows everytime she finds something new about him she wishes she did not.

We have a flash back to the 80’s and learn how Bill is involved in bringing vampires out of hiding.  He meets Nan Flanigan and she engages him as a vampire spy.

Lafayette and Jesus are discussing magic and Lafayette is upset about what they saw when they visited the witches (bird coming alive).

Sookie is back at the bar and she apologizes to Sam.  Arlene and Terry come in with their new son.  Arlene soon gets upset and tells Sookie not to read her mind.

Back at wear-panther place and Andy Bellefleur shows up. Andy is telling the kid that he thinks they are dealing V (Vampire Blood)  Andy shows them a warrant.  Meanwhile Crystal is trying to keep Jason quiet.  Jason is trying to scream so Andy can here him.    Phil gives Luther a vial of V to give to Andy.  Andy takes it and says that you he is taking it as evidence and leaves (Remember Andy is addicted to V)

Back at Sam’s place he finds Luna (another shifter) sitting in a chair.  She is going to try to be more open with Sam hope they can get to know each other.  She kisses him and they make a date for the night.

While having a stare off with the baby (I think she is trying to see the evil), blood vessels pop in Arlene’s eye, and it seems that cute adorable baby did it. At least that is what Arlene thinks and she tells the baby he is “Rotten to the core just like his daddy” and runs away.  Terry doesn’t buy it, but that baby suddenly seems a lot more creepy.

Sookie has an illusion of Queen Mab and the faeries chasing her and screams and then we see Tara who hugs her.  They have a nice moment – it’s nice to see them back together.   But when they get inside, Sookie finds a new door, a new microwave and a state of the art sleeping hole for Eric for those days he chooses to sleep there.  Tara asks her if she is with Eric now and she says NO.

Meanwhile Jessica gets pissed at Hoyt when she offers him her blood to help heal him since he got into a fight with one of the protesters and he calls her Vampire blood “that sh*t” and she gets pissed.  Jessica is rebelling and heads to Fangtasia and lets her hair down.  She is flirting with the men.  Sookie goes into the bathroom and finds Jessica feeding off another man and asks her what Hoyt is going to think.  She tells Sookie to F off.

Eric comes to Bills place and Bill asks Eric if he will sell Sookies house back from him and he says no.  Bill tells Eric he wants him to check out the coven because they are dangerous.   Eric tells him he will go that night and bows and says “My King” and it is very sarcastic.  Next they clear up how Bill beat the Queen of Louisiana.  They give us a flashback!  He brings humans with bullets with a silver core and they shoot her and kill her.   Bill is part of the AVL and they are who helped him kill the Queen.  Once the Queen is dead they make Bill the King of Louisiana.

Sookie heads over to Fangtasia and is talking to Pam and is complaining about Eric buying her house.  Pam says what do you want me to do Eric is her maker after all.  Pam tells her she should really consider Eric’s offer.    She tells Sookie because she is a faery someone is going to have her and it might as well be Eric because he is handsome and rich.  Sookie tells her she will never be Erics.

We are back at the coven and they are talking what happened with the bird coming alive.  They are saying how Marnie appreciated what they did last night.  Marnie tells the coven they are going to raise a human body.  Lafayette is asking where they are going to get a dead body.  All of a sudden Eric shows up and says looking for a dead body.  Then Eric says to Lafayette I did not know you were a witch.  Eric is telling the coven that this is the last time their coven convenes.  He said for them not to agree and then meet behind his back, because there is no behind his back.  Marnie asks what is in it for her.  Eric tells her he does not negotiate.  Lafayette tells her to listen.  Eric grabs Marnie and bites her while all the witches chant.  Eric grabs Tara after she grabs a stake. He threatens to bite her, when Marnie starts casting a spell and Eric leaves.  (Now if you have read the book you know what happens to Eric here hint, hint…

Sam (ho him boring ) is with a bunch of shifters in the forest and they are talking about the strangest thing they have ever shifted into. We learn Luna’s mother died giving birth to her, and in the past she has shifted to look like her mom. Wow.  Before we can learn much more, the group sniffs out another shifter nearby – Tommy.  He saw Luna and Sam kissing earlier and Merlotte’s and he is curious. He tells Sam he wants a relationship.  Ya right why do I know this is not going to work out?

Back in Hotshot, we see Phil and Crystal.  Jason asks if they are going to kill him and Crystal says not they are going to make a baby.  She has a duty to propagate the blood line and Phil is shooting blanks.  They proceed to bite Jason all over to turn him into a wear-panther.

Sookie is driving the car when she comes upon Eric.   He has amnesia and he does not know who she is.  He asks her “Why do you smell so good?”

The show is over, don’t forget to stop by next week for our recap !

So, what do you like about this season so far? What don’t you like and what do you like the most?  I could do without Sam and the Arlene and baby thing is a little too much….  Hope they stick to book 4 because it will be a fabulous season!