BY Robyn Good on November 21, 2011 | Comments: Leave Comments
Related : Synopsis, TV, Two and a Half Men 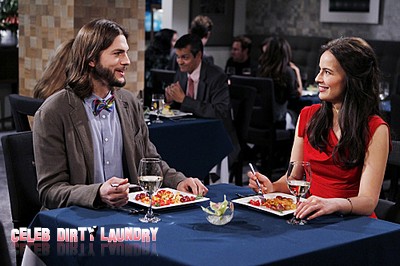 An all new episode of Two and A Half Men will air tonight on CBS.  It is the tenth episode of the 9th season and it is called ‘A Fishbowl Full of Glass Eyes.‘  Each time I watch the show I am sure it is going to be the last, but alas, no!   I have to admit last week was the first show that was not too bad I actually laughed a bit.  I guess the best thing about the episode was the fact that Walden (Ashton Kutcher) has almost no story line :-) and he was not naked!  If you missed last week’s episode you can read our official recap here!

Fishbowl Full Of Glass Eyes, Official Synopsis: Walden hits it off with a British babe, but neither Walden nor the women are  sure he’s ready to re-enter the dating world.  Walden offers Allan and Jake 1.4 of a million airline miles, he cannot use them because he has a plane.  Alan has a small disaster while trying to sell a crystal vase.  Guest Stars: Sophie Winkleman as Zoey, Jonathan Banks as Sid.

The beginning of the preview is funny, the camera pans in on Ashton Kutcher and we hear ‘This guy has  a lot too be thankful for.’  I wonder if they are being sarcastic?  Demi Moore and Ashton announced their marriage was over a couple of says ago.

Take a look at the  preview of Fishbowl Full Of Glass Eyes below and let us know what you think in the comments!  The epsiode airs tonight November 21st, 2011 at 9PM on CBS.  Make sure to stop by and visit us at 9 PM because we will be live blogging the show with up-to-the-minutes details!